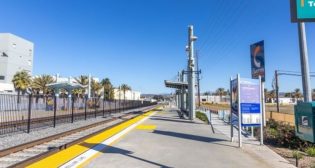 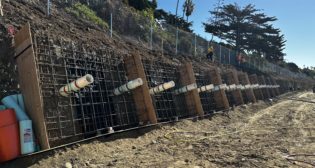 Now that the heavy rains have subsided, the Orange County Transportation Authority has been successful in stopping slope movement and stabilizing the tracks in South San Clemente, clearing the way for weekend service to resume. 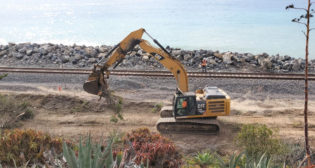 Orange County transit officials have proposed an effort to better protect the county’s sole railroad link to San Diego by adding more boulder seawalls along seven miles of the coast between San Clemente and Dana Point.

RT&S has reported extensively on the bluff failures at Del Mar and San Clemente during the past year. Now, the Orange County Transportation Authority and its contractor have begun construction activities to stabilize the railroad track through southern San Clemente, work that is expected to be completed in February. 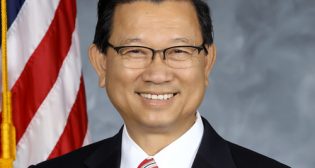 Orange County First District Supervisor Andrew Do was unanimously elected [yesterday] as the new Chairman of the Orange County Transportation Authority Board of Directors, which is responsible for planning, funding, and delivering 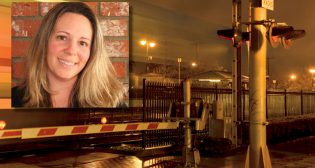 The Orange County Transportation Authority (OCTA) has appointed industry veteran Jennifer Bergener to the company’s newly-created position of Chief Operating Officer. OCTA said Bergener will hold the role, which is intended to

The Orange County Transportation Authority’s (OCTA) board of directors has selected HNTB Corporation to design the OC Streetcar project. 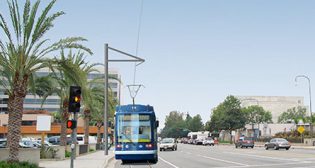 The OC Streetcar project marked its latest milestone this week as the Orange County Transportation Authority (OCTA) Board of Directors agreed to a memorandum of understanding with the city of Santa Ana, outlining the roles and responsibilities associated with the development, implementation, operations and maintenance of the project. 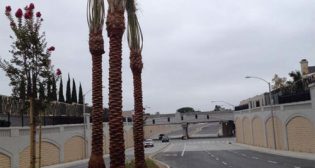 Orange County Transportation Authority (OCTA) officials and city leaders from Fullerton, Placentia and Anaheim, Calif., marked the start of construction on the final three projects in the O.C. Bridges program with a groundbreaking ceremony May 9.

Drivers stuck at rail crossings in north Orange County, Calif., will soon find relief as the Orange County Transportation Authority kicks off a nearly $600 million program that will separate street traffic from trains at seven locations.

Known as the O.C. Bridges Program, the projects will eliminate the need for drivers to waste time idling at rail crossings, waiting for trains to pass.

"Making the important upgrades on these railroad crossings will positively benefit everyone impacted by delays on these crossings," said OCTA Chair Patricia Bates, also the Fifth District Supervisor. "This project will benefit pedestrians, motorists and residents alike by enhancing safety, eliminating traffic delays and improving the quality of life."

OCTA is working to improve traffic flow and safety at seven crossings along the BNSF rail line in Anaheim, Fullerton and Placentia by building a series of bridges, both underpasses and overpasses, to separate car traffic from trains.

Placentia Avenue, which borders the cities of Fullerton and Placentia, and Kramer Boulevard are the first of the seven projects to begin construction. The additional crossings will begin construction on a staggered basis over the next two years and include Orangethorpe Avenue, Tustin Avenue/Rose Drive, Lakeview Avenue, Raymond Avenue and State College Boulevard.

Nearly 70 trains a day travel along the BNSF rail line through Anaheim, Fullerton and Placentia and that number is anticipated to increase more than 45 percent by 2030; meaning every 10 minutes a train will be blocking each intersection.

"Without the bridges, drivers would be stuck at blocked intersections waiting for passing trains," said OCTA CEO Will Kempton. "Orange County’s economy and communities are second to none and we have to ensure our transportation system supports our growing area. These grade separation projects will have a lasting impact on drivers and I am excited to see them get under way."

The commission allocated the money as a result of state bond sales last month.

In addition to the $69 million awarded to a road project, OCTA rail projects that received funding include:

• $29.2 million for construction of the Anaheim Regional Transportation Intermodal Center

Since its passage in 2006, more than $7 billion in Prop 1B funds has been allocated, including more than $420 million for Orange County projects.

The Orange County Transportation Authority’s San Clemente slope stabilization project has been halted recently due to rain, raising questions about whether the delay will extend the suspension of passenger train service on the county’s sole railroad link between Orange and San Diego counties. 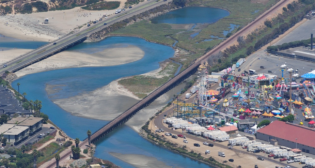 North County Transit District (NCTD) and the city of Del Mar, Calif., disagree on how to spend a $300 million grant from the state’s Transit and Intercity Rail Capital Program, according to The San Diego Union-Tribune. 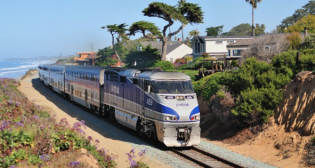 Orange County Says Trains May be Back in February

There’s a small bright spot in the ongoing saga of the erosion of the southern California coast, and the impact on rail lines and rail service. 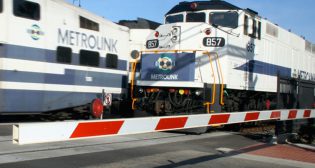 Orange Country seems well-positioned for transportation infrastructure improvements during the next couple of decades. 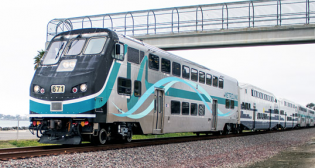 The Orange County Transportation Authority and Metrolink is inviting the public to learn more about a proposed railroad track project in Dana Point, Calif., to provide safer and more reliable train service. 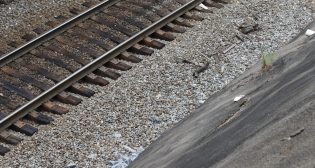 Oklahoma’s Kiamichi Railroad will use a $10 million federal grant to make some much-needed improvements to its rail line. The short-line railroad company operates on 200 miles of track in southeast Oklahoma.