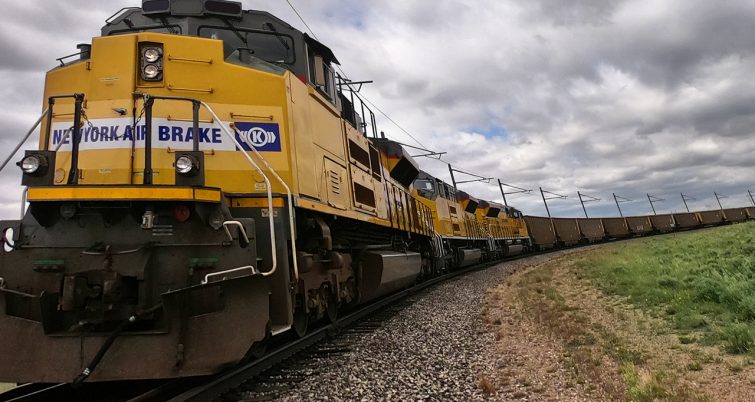 Aug. 27, 2019, will arguably be one of the single most important days in North American freight railroading in recent history. On a test track at TTCI (Transportation Technology Center, Inc.) in Pueblo, Colo., with railroad executives and industry officials in attendance and locomotive engineers in the cab, a PTC (Positive Train Control)-compliant, heavy-haul freight train consisting of three EMD high-horsepower road locomotives and 30 loaded cars carrying 4,725 trailing tons started and stopped solely under the command of an on-board computer.

The test, called “Zero-to-Zero,” involved the latest iteration of New York Air Brake’s LEADER (Locomotive Engineer Assist/Display and Event Recorder) system. LEADER, widely deployed across the industry as a fuel optimization technology, demonstrated automatic operation of throttle, dynamic brake, independent brake and air brakes, controlling the train for 48 miles over a variety of terrain, starting and stopping on uphill and downhill grades and on level right-of-way, “providing precise control that conserves fuel and reduces in-train forces,” according to NYAB Senior Vice President Marketing, Sales and Service Jason Connell. “The main purpose of the Zero-to-Zero demonstration was to show that LEADER can precisely execute any railroad’s operating strategy in the North American PTC environment.”

The first version of LEADER was LEADER DriverAssist™, first deployed on Norfolk Southern. NYAB describes this version as “advising locomotive engineers (“driver prompt”) on train handling (throttle and dynamic/pneumatic brake application) in a way that saves fuel.” The algorithms programmed into LEADER DriverAssist™ generate “look ahead” scenarios that do not start and stop a train, but enable the locomotive engineer to achieve, in railroading lingo, a “golden run.” 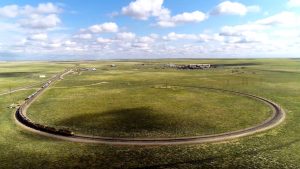 Precision train handling using computers is improving railroad operations and reducing operating ratios. Autonomous operation of PTC-compliant freight trains in PTC territory in select locations in North America is several years away. The computerized train handling test at TTCI in Pueblo is the first of what are expected to be many such demonstrations and evaluations.

Rio Tinto on Dec. 28, 2018, successfully completed its $940 million AutoHaul project to automate the operation of its 1,054-mile heavy-haul rail network in the Pilbara region of Western Australia—the Mine of the Future™, which it describes as the “world’s largest robot and first automated heavy-haul, long-distance rail network.”

Rio Tinto first proposed full automation of its Pilbara heavy-haul rail network about 10 years ago. The project reached a milestone in May 2018 when the AutoHaul™ system received Australian regulatory approval. This was followed in July 2018 by the first fully automatic operation of a loaded train. The 28,000-ton train was hauled by three GE (now Wabtec) locomotives and traveled more than 175 miles from Tom Price mine to the port of Cape Lambert without an engineer in the cab.

By October 2018, autonomous operation had increased to an average of 34 1.5 mile-long trains per day, equating to 180,000 miles or 45% of daily route-miles operated. Since July 2018, Rio Tinto had steadily increased the number of autonomous trips across its network, with more than 600,000 miles operated autonomously as of year-end 2018, although a few trains continue to be operated manually, or have engineers on board, monitoring conditions.

AutoHaul™ technology, developed by Hitachi Rail STS, is based on the international standard digital radio-based signal and train protection system ATO over ETCS (European Train Control System, the signaling and control component of the European Rail Traffic Management System, or ERTMS) Level 2 at GoA4 (Grade of Automation 4), which enables fully automated train operation. Locomotives fitted with AutoHaul™ software also have on-board cameras to permit constant monitoring from the Rio Tinto operations center in Perth, more than 930 miles south of the Pilbara region. In addition, all grade crossings along the right-of-way have been equipped with CCTV upgraded to what Rio Tinto says are “the highest safety standards.”

Automation was expected to increase average train speed 6% by reducing acceleration and braking variations caused by manual operation. Trains now no longer have to stop for crew changes en-route, and Rio Tinto expected to avoid having to transport engineers by highway for operational reasons such as train crews reaching the limit of their hours of service before arriving at a terminal. In addition, the company expected its annual iron ore capacity to rise from 340 million to 360 million tons. Automation, Rio Tinto said, would also enable it “to adapt output more easily to changes in market conditions.”

Rio Tinto operates a fleet of about 200 Wabtec high-horsepower diesel-electric locomotives transporting iron ore from 16 mines to four port terminals. The trains average about 500 miles on a round trip, with an average trip cycle, including loading and dumping, of around 40 hours.

“The safe and successful deployment of AutoHaul™ across our network is a strong reflection of the pioneering spirit inside Rio Tinto,” said Rio Tinto Iron Ore Managing Director-Rail, Port and Core Services Ivan Vell earlier this year. “It has been a challenging journey to automate a rail network of this size and scale in a remote location like the Pilbara, but early results indicate significant potential to improve productivity, providing increased system flexibility and reducing bottlenecks. Over the coming months, we will continue to refine our autonomous operations to ensure we are able to maximize value. We continue to work closely with engineers during this period and do not expect to make any redundancies in 2019 as a result of the deployment of AutoHaul™.”