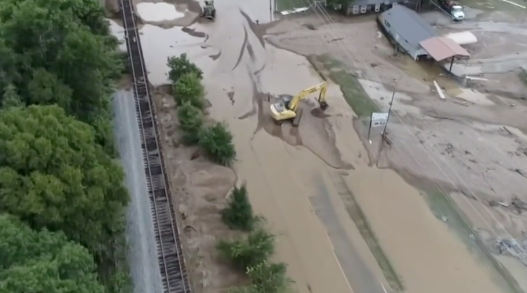 A drone shows flood damage around a line of CSX tracks in Tennessee.
News 4 Nashville

A line of railroad tracks might have served as a floodgate in the town of Waverly, Tenn.

The state was hammered with heavy rains over the weekend, weakening the ground beneath the CSX line. A swollen Trace Creek also was putting pressure on the railroad bed. Two sections became completely washed out, which is when floodwaters were released onto Highway 70.

CSX crews responded immediately to try to repair the damage.

Residents have been wondering how a surge of water took over the town so suddenly. Many think it was due to the breach at the CSX railroad tracks, but Waverly Public Safety Chief Grant Gillespie believed many sources were behind the surge. He said other creeks in the area also might have contributed.

See drone footage of the flooding around the tracks.