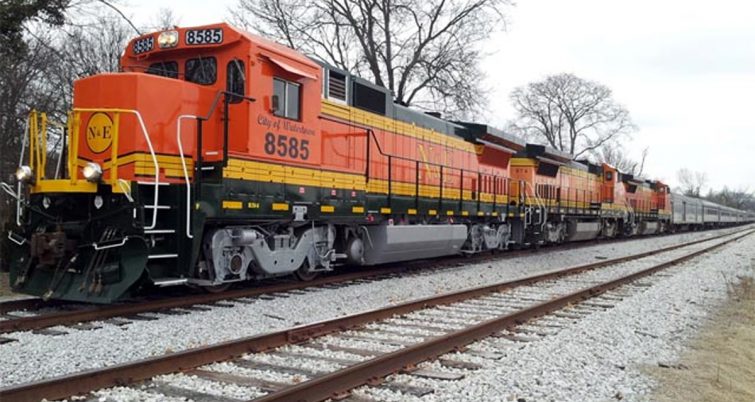 City officials in Watertown, Tenn., are predicting what they expect to be a dramatic boost to the city’s tourism with the addition of a new attraction. A railroad turntable arrived during the afternoon of Jan. 12, drawing the attention of bystanders as crews unloaded the turntable in a local community park.

CSX Transportation donated the turntable, and crews from CSX and R.J. Corman Railroad Group, which recently purchased Nashville and Eastern Railroad and is the owner of the tracks through the city where the turntable will be placed, worked in tandem with the Mammoet moving company to transport the structure from Atlanta, according to the Lebanon Democrat of Tennessee.

The turntable’s arrival in Tennessee was delayed by state permits, a local report said, during which time the structure remained at the Georgia state line for several days before reaching its new home in Watertown.

Crews used two small cranes to lift the largest portion of the turntable off of the trailer that was used to transport it and lower the structure onto the ground in the park, where it will temporarily reside until the funds needed to install the turntable across Sparta Pike at the train platform are raised.

Upon its installation, which officials said could cost up to $500,000, the turntable will be used to lift and turn trains 180 degrees on the tracks to enable them to move in the opposite direction. An R.J. Corman official told RT&S the turntable is not expected to be used in daily operations.

A block-wide section of Sparta Pike was shut down for about two hours while crews worked to unload the turntable at the park, the report said.

Officials said the cost to transport the turntable to Watertown was around $65,000. Funds in support of shipping the turntable came from donations, including donations from Nashville and Eastern Railroad Corp., which contributed $20,000 that was matched through a donation from Rich Tarver with Cantilever in California.