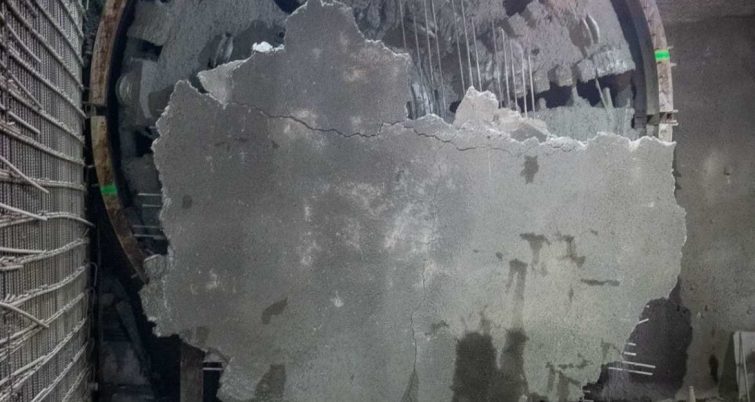 Metro’s first tunnel boring machine breaks through at the site of the future Wilshire/La Cienega Station.
Photo via Metro's The Source

Some new details emerged last week on Metro’s herculean task of tunneling below Wilshire to extend the Purple Line subway.

Metro is extending its Purple Line (now renamed the D Line) subway westward in three sections. The $3 billion section one (WPLE1) will extend the line 3.9 miles under Wilshire Boulevard from Wilshire/Western Station to La Cienega Boulevard at the edge of Beverly Hills. WPLE1 construction began construction in 2014. The project is currently 68 percent complete and anticipated to open to the public in 2024.

In mid-2018, Metro’s two WPLE1 tunnel boring machines (TBMs) initially dug east from La Brea Avenue to Western. The TBMs were then transported back to La Brea and launched westward in October 2019. Tunneling under Wilshire west of La Brea – in the vicinity of the La Brea Tar Pits – has been slow. Metro had to temporarily pause tunneling many times due to obstacles including tar, methane gas, an abandoned oil well, and more. Those delays resulted in a $200 million (seven percent) WPLE1 budget increase, approved last October.

Last month, the first of WPLE1’s two TBMs completed its work, breaking through at the site of the future La Cienega Station.

At last week’s Metro board Construction Committee meeting [video – WPLE1 discussion starts at minute 9:37], Metro Executive Officer Project Management Sameh Ghaly noted that delays had further impacted the WPLE1 cost and schedule (that cost increase will return to the board after April). Ghaly reported that WPLE1 crews had successfully removed an “anomaly” – large pieces of steel. Ghaly announced that the second TBM was expected to complete its work Thursday or Friday – as soon as the day after tomorrow.

Responding to a question from Board member Fernando Dutra to explain what the anomaly was, Metro Chief Program Management Officer Richard Clarke described the challenges faced during WPLE1 tunneling:

As we were doing the tunneling, we encountered many unforeseen things… We decided that we should… probe ahead of the machine in case there was something unforeseen out there. We did that. And it picked up something… something in the ground that didn’t seem to make sense. It wasn’t congruent with the other ground conditions.

We got to the location. We had to grout from above to stiffen the earth, so as we dug ahead of the shield of the machine, so that the ground wouldn’t settle or even worse.

…if we had just not done that and had those pieces of steel destroyed the shield… (because once the machine would have been stopped there the only way we have seen to extract the damaged machine was from the surface – which would have meant shutting down the intersection of Wilshire and San Vicente…) it would have been a complete disaster, but we avoided the disaster but not without some cost to address it.

Metro was unable to determine what the “very heavy” metal beams were from.

Hopefully after this week, the unforeseen challenges will be in the past, and the focus can shift to completing the stations themselves.

Blog reproduced courtesy of the L.A. Metro’s The Source via Streetsblog L.A.