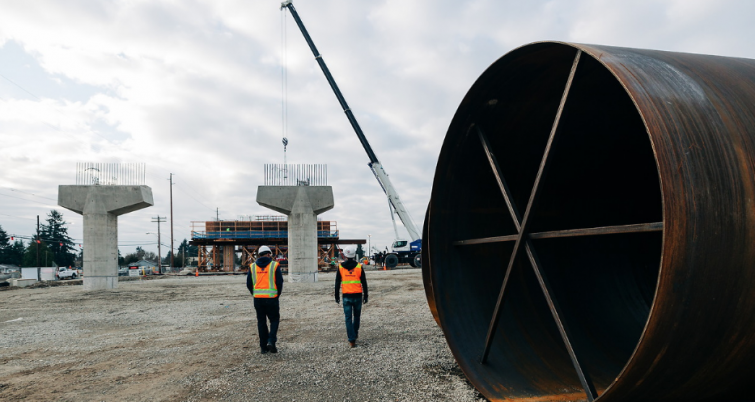 The girders being installed on the Federal Way Link Extension typically weigh up to 130,000 lb.
Sound Transit

The first elevated light-rail structures for the Federal Way Link Extension are now in place.

Workers began installing the girders this week to support the elevated station platform of the future Kent/Des Moines station. Girders supporting the elevated rail line will be installed throughout the alignment in the coming months.

“Our work to bring light rail to Federal Way continues to move forward rapidly,” said Sound Transit CEO Peter Rogoff. “By 2024, the track structures that South King County residents are watching go up will carry thousands of riders each day on a 62-mile rail network, compared to the 22-mile segment we have today. While greatly expanding our region’s mobility, this project will help our region recover from the COVID-19 recession by employing thousands of workers in living wage jobs.”

The current work includes placing six girders at a time. The girders are typically between 100 to 115 ft long and weigh up to 130,000 lb. The girders are too large to be delivered during the day due to oversized load traffic regulations. Crews also have drilled 36 of 121 shafts and placed 25 of 121 columns that will support future elevated tracks and station facilities.

Kiewit Infrastructure West Company is the design-build contractor for the $3.1 billion project, which is funded in part by a $790 million grant from the Federal Transit Administration and a $629.5 million Transportation Infrastructure Finance and Innovation Act (TIFIA) loan from the U.S. Department of Transportation.