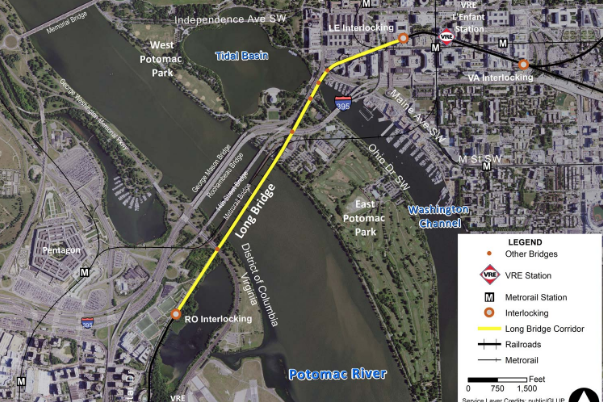 The Virginia Department of Rail and Public Transportation (DRPT) and the District of Columbia Department of Transportation (DDOT) announced the conclusion of the environmental planning process for the Long Bridge rail project. This marks a major milestone in the planning process for the new rail bridge and independent pedestrian/bicycle bridge that will span the Potomac River and opens the door for the final engineering design, financing, and construction of Long Bridge.

“A new bridge across the Potomac River represents a once-in-a-generation opportunity to make the rail system work better for everyone along the entire East Coast,” said Virginia Gov. Ralph Northam. “The project has passed an important milestone, thanks to close collaboration between Virginia, D.C., and the private sector. We are all excited about bringing easier and faster mobility to commuters and travelers.”

The completion of the combined Final Environmental Impact Statement (FEIS) and Records of Decision (ROD) is key for the advancement of the Long Bridge project, and its completion demonstrates the cooperation among the Federal Railroad Administration (FRA), DRPT, DDOT, CSX, and the National Park Service (NPS).

“By increasing freight and passenger rail capacity and adding long-sought connections between bicycle and pedestrian routes in the District of Columbia and northern Virginia, the Long Bridge Project is helping us build not just a more connected region, but a greener and more sustainable region,” said D.C. Mayor Muriel Bowser.

“The completion of the FEIS and ROD for the proposed Long Bridge capacity expansion project is a significant milestone that will allow Virginia and the District of Columbia to move forward with expanding the rail crossing over the Potomac River,” said Federal Railroad Administrator Ronald Batory. “This effort was the result of collaboration at the state and federal level and was supported by FRA grants for planning and environmental review.”

Owned and operated by CSX, the existing Long Bridge is the only railroad bridge connecting Virginia to the District of Columbia and is one of the most significant passenger and freight rail choke points along the entire east coast. Under normal circumstances, the bridge functions at 98 percent capacity during peak periods, preventing the District, Virginia, and Maryland from increasing passenger and commuter rail service for their communities.

“We appreciate the strong collaboration with the Commonwealth of Virginia, the District of Columbia, VRE, and Amtrak throughout the Long Bridge study process,” said James Foote, CSX president and chief executive officer. “CSX looks forward to continuing these positive partnerships as we work to improve both freight and passenger rail capacity and service in the region.”

“The Long Bridge project, made possible through collaboration with private, state, and federal partners, will transform passenger and freight rail operations for generations to come,” said Virginia Secretary of Transportation Shannon Valentine.  “Unlocking the gridlock across the Potomac will improve rail service, expand capacity for the Port of Virginia, connect workers to key employment centers, and contribute to our nation’s economic recovery and growth.”

The new, Virginia-owned, two-track bridge will be built across the Potomac River adjacent to the CSX freight bridge and will be dedicated exclusively to passenger and commuter rail. Through the separation of passenger and freight rail, the new bridge will also reduce congestion and improve fluidity for CSX and its customers. This additional efficiency is expected to translate to increased freight rail, removing an additional 1 million trucks from Virginia and District roadways each year.

In addition to rail congestion relief, the Long Bridge project will create a new, independent pedestrian and bicycle bridge crossing of the Potomac River between the Mount Vernon Trail, Crystal City, and the monumental core of the District of Columbia.

“These new bridges will ensure personal mobility is prioritized for District residents and commuters, without the negative impacts of increased traffic congestion or air pollution,” said DDOT Director Jeff Marootian.“This project is another example of the Bowser Administration’s commitment to not only expanding D.C.’s network of protected bicycle lanes, but also investing in infrastructure that will make alternative transportation safer for commuters and residents.”

The FEIS and ROD also make the Long Bridge project eligible for additional federal financing opportunities. Initial cost estimates for the bridge project comprise nearly $1.9 billion of the $3.7 billion total cost of the Transforming Rail in Virginia initiative, financed through local, regional, state, and federal sources, including a $944 million partnership with Amtrak.

“Amtrak commends this latest development for the construction of a new, expanded Long Bridge, which will be a critical step in increasing passenger rail, protecting our environment and enhancing mobility,” said Stephen Gardner, Amtrak Senior Executive Vice President and Chief Operating and Commercial Officer. “We look forward to continuing our work with Virginia and all stakeholders to move this important project forward and increase transportation options for the community.”

The completed environmental impact study for Long Bridge, initiated by the District of Columbia in 2016, evolved to include the addition of the bicycle and pedestrian bridge and an expansion of the track design from three to four tracks from Alexandria north. The EIS was partially funded through a local match provided by Virginia Railway Express.

“VRE’s ability to improve reliability and increase service is contingent upon this dedicated passenger rail bridge,” said VRE Acting CEO Rich Dalton. “As a funding partner, we look forward to working with our colleagues at DRPT, Amtrak, CSX, and other state and federal agencies to bring about this transformation, which will improve the commutes of Virginians in our service area for decades to come.”

For more information on the Long Bridge FEIS and ROD, please visit: www.longbridgeproject.com