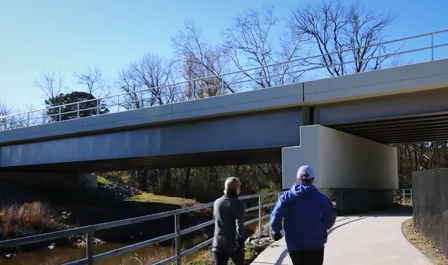 The NCRR replaced a rail bridge that was over a century old.

Construction replacing a nearly 100-year-old railroad bridge in Morrisville, N.C., is complete. The new Crabtree Creek Bridge allows for a future second track to accommodate added freight service as well as future passenger or commuter rail. The project includes the extension of a pedestrian greenway under the bridge, connecting Morrisville and Cary’s greenway systems.

“The construction of a new bridge that accommodates future growth of freight and passenger service, while also connecting two major greenway routes in the Triangle, is a win-win for all involved,” said NCRR President and CEO, Carl Warren. “As we look ahead, we understand that mobility, whether by rail or other means, is incredibly important and we are proud to have partnered with Morrisville on this forward-thinking project.”

“This was an important project for the town of Morrisville. Our partnership with North

Carolina Railroad allowed us to connect our greenway system with Cary’s and rebuild an aging bridge,” said Morrisville Assistant Town Manager Brandon Zuidema. “Our Town is no longer dissected for pedestrians and bicyclists. This connection creates an east-west greenway corridor border to border through Morrisville.”