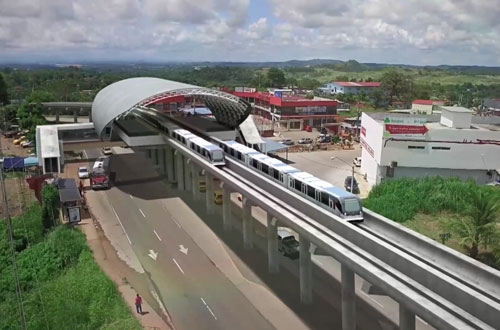 A monorail system like the one above might be used to help congestion on New Jersey’s Garden State Parkway.

If widening is not an option for the Garden State Parkway, then lighter will be one.

During a recent budget hearing, officials talked about using ultra-light rail to help solve congestion in spots on the famous New Jersey thoroughfare. A monorail type system could be placed in the center of the median where acquiring additional right-of-way to widen the Parkway would be difficult. Ultra-light rail could be used in Union and Essex counties, particularly between exits 139 in Union and 151 in Bloomfield on the Parkway.

Transportation Commissioner Diane Gutierrez-Scaccetti says every technology will be considered. When New Jersey was looking to move people to and from Metlife stadium, 54 public and private companies pitched solutions as part of NJ Transit’s innovation challenge. The same approach could be taken for the Parkway.

New Jersey Gov. Phil Murphy has mentioned the use of a magnetic levitation monorail for future projects.