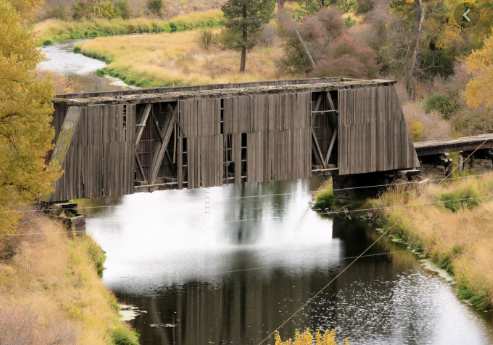 The Manning-Rye Covered Bridge in Whitman County, Wash., was destroyed by a fire.

The fires out west are doing nothing to preserve history. They are destroying everything in their path, including the Manning-Rye Covered Bridge in Whitman County, Wash.

The bridge crosses the Palouse River and was just one of two covered bridges remaining in the state of Washington. The Spokane and Inland Empire Railroad built the bridge in 1918.

Even though it was called a covered bridge, the Manning-Rye was constructed with an open top. It is believed that the bridge replaced another one when electric railroads were built in the region in 1907. The reason the top was open was because it allowed the locomotives using the bridge to stay connected to overhead electric lines.

The Great Northern Railroad owned the bridge until 1967, and in 1969 it was bought by a private landowner to save it from being demolished. The bridge was the only access point to a home that also was destroyed by the fire.

The Manning Fire has now scorched over 3,000 acres and is only about 25 percent contained. The fire was a separate blaze from a fire that destroyed 80 percent of the town of Malden, Wash., which also has strong ties to railroad history.