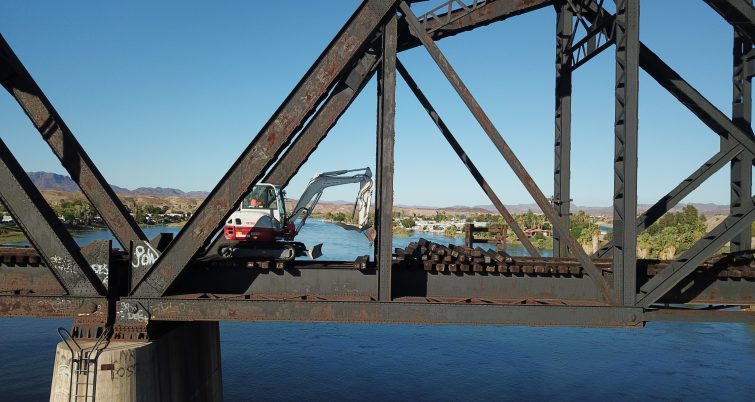 A mini excavator replaces ties on the Genesee & Wyoming rail bridge over the Colorado River. At press time officials did not know how the fire was started.
Genesee & Wyoming

This time of year, no matter where you are in the U.S., the ground is never saturated. Not when you are talking about rail construction supplies like wooden ties and rail.

On the night of Sunday, Sept. 15, Bill Riehl, vice president of Structures for Genesee & Wyoming Railroad Services Inc., was surveying the damage following a fire that started near one of the concrete piers of a bridge that connected Arizona and California across the Colorado River. What Riehl saw was a relief—most of the damage was confined to wooden ties and rail on the east side of the span.

“Because of the efforts of the [Buckskin] fire department to get the fire out in a timely fashion the area over the timber portion of the bridge was still standing, so then it was just a matter of what was fire-damaged that we had to replace,” Riehl told RT&S. “Sometimes you roll up on some of these and it is just a smoking hole in the track and you know that you have lost everything. 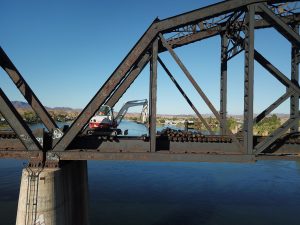 A mini excavator replaces ties on the Genesee & Wyoming rail bridge over the Colorado River. At press time officials did not know how the fire was started.

“The fire was out on the timber portion of the bridge, and there were still some ties smoldering out on the steel span that the fire department could not get out to, so those were just left to burn. The rail was buckled from the heat, and there was a lot of char on the timber foundations.”

Riehl, however, did not have a handle on everything … not just yet. The real challenge was finding if there was enough material out there to replace the damaged portion of the 1,622-ft-long bridge—made up of timber approaches, concrete piers, concrete segments as well as a steel through-truss portion—in a timely fashion. This time of year projects are wrapping up and there is not a whole lot of material on the ground ready in case of an emergency.

After placing calls out to available contractors the morning of Sept. 15, Genesee & Wyoming went with Christensen Bridge and Rail, LLC due to a number of factors: response time, manpower, equipment and, perhaps most important, the contractor’s material relationship with Union Pacific. Union Pacific was able to pull from its store in Tucson, Ariz. Genesee & Wyoming’s vast network also came into play, as 40 percent of the needed material was available at Arizona Eastern Railroad located about 200 miles way in Phoenix, Ariz. Arizona Eastern Railroad is owned by G&W. All of the material that was needed for repairs was on-site four days after the fire.

on the ground is committed, so being able to find material was a real win,” said Riehl.

Genesee & Wyoming’s inspection team beat Riehl and others to the smoldering bridge. Arriving in the mid-afternoon on Sept. 15, the team readied for an assessment to see the severity level of the damage. The main concern was with the timber span on the east portion of the bridge where the fire burned. Section loss had to be determined and the amount of timber material had to
be quantified.

The charring was about ½ in. thick in the pile foundations, which was not enough for replacement. However, two stringers located on spans 9 and 10 suffered charring in excess of 1 in. and had to be replaced.

As for the steel through-truss portion of the bridge, remains of the legacy paint system on the bridge and about 100 years of weather accumulation were reduced to a “fresh, fine rust,” according to Riehl. Areas of steel had scorch marks, but there were no signs of deformation or anything affecting the material’s structural integrity. A pony bent, which is a small frame timber structure that matches the elevation of the approach stringers to the floor structure in the through-truss, was completely engulfed in flames, as was a cross member located next to the pony bent. A tree on the north side of the bridge caught on fire, creating scorch marks on the bottom chord of the first steel truss panel. 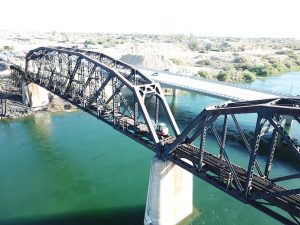 Rail service on the rail bridge was restored on Sept. 21 and the entire project was complete Oct. 2.

The timber approach on the first truss span on the eastern side of the bridge was demolished along with ties on the timber approach and the steel span. The timber span that had the two damaged stringers also were knocked down, and as soon as those stringers and span were replaced crews were able to install enough ties across the bridge to support the rail that had to be fixed.

With that phase complete, rail service was restored on Saturday, Sept. 21. The contractor then continued to install the rest of the ties, secondary members and bracing. A total of 78 ties were replaced on the timber approach and 154 ties were replaced on the first through-truss span. According to Riehl, 387 ft of rail was replaced. The entire project was complete on Oct. 2.

Genesee & Wyoming experiences about two or three rail bridge fires a year, but many are small and quickly extinguished with no significant damage.

However, over the last four or five years, Riehl said G&W has lost at least one bridge a year. The Buckskin fire team was able to take an effective approach on Sept. 14, taking advantage of easy access on the east side of the bridge.

At press time the cause of the fire had not been determined. The Federal Bureau of Investigation, Alcohol, Tabacco and Firearms and the Bureau of Indian Affairs (the site is adjacent to Indian lands) were all out trying to figure out what ignited the blaze. Officials believe the fire started close to the first concrete pier on the east side, designated pier 11. 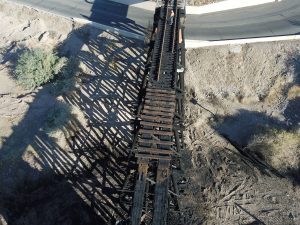 The main concern was with the timber span on the eastern portion of the bridge.

Adjacent on the pier was an electrical connection for the navigational lights on the bridge. According to Riehl, there was a charring or soot stain on the concrete above the electrical box, but it was not known if there was an electrical short that started the fire. Investigators were looking for any signs of a campfire or accelerants around the foundations. 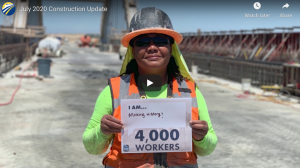