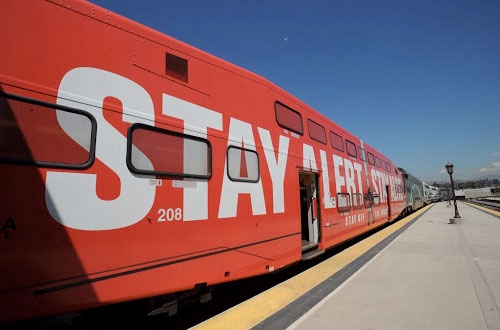 “Significant progress has been made, but as long as accidents continue, we will continue our efforts to stop them,” said LACMTA Board Chair Diane DuBois. “During the past year, LACMTA has aggressively pursued a program to stop rail-related accidents and suicides along rail by pursuing the three Es: education, engineering and enforcement. We’re encouraged by the significant drop in accidents and suicides, but we want to remind the public that there are only so many signs and gates we can put up and so much fencing. They must take responsibility for their own safety and remain alert around the trains.”

Although there has been a dramatic reduction in LACMTA Blue Line accidents this year (three fatalities versus eight during the same period last year), and other rail lines are experiencing low accident rates similar to previous years, LACMTA continues to develop methods for keeping vehicles and pedestrians aware of and away from moving rail.

The Blue Line is an example of how public education and LACMTA engineering efforts have resulted in a safer line, both for passengers and for those who travel near and across the tracks.

Metro safety ambassadors, many of whom are retired rail and bus operators, are assigned to various spots where accidents have occurred in the past. On the Blue Line, 14 ambassadors are positioned at seven key locations in two shifts, Monday through Friday, when accidents are likely to occur, to answer questions and to warn and educate pedestrians and passengers about the dangers of standing too close to the tracks and trying to beat on-coming trains. They also are there to remind patrons and pedestrians of good safety behaviors, such as looking both directions when crossing the tracks since trains come from both directions.

LACMTA’s safety education department has conducted yearly presentations at 160 schools within a 1.5-mile radius of the Blue Line alignment. It has developed videos and CDs on safe and unsafe behaviors around tracks and trains. Suicide prevention signs have been installed at all stations and at high-speed gated crossings. Additional safety material has been distributed to 250,000 doors near the Blue Line.

This year, LACMTA began a partnership with the Didi Hirsch Suicide Prevention Center, which works with referrals from LACMTA to help stop suicides along the Blue Line.

A variety of engineering efforts also have been instituted. They include: a closed at-grade crossing on Flower Street, four quadrant gates and vehicle detection loops at six intersections, flashing “Train” signs as replacements for stagnant “No Left Turn” signs in some places, additional flashing lights and bells at several gated crossings, swing gates at several high-traffic pedestrian crossings, railroad-type barriers at several crossings, colored stamped crosswalks and pavement markings, electric horns as replacements for mechanical horns on the trains, headlights modified on all light-rail trains to flash alternately and the installation of in-pavement warning lights.

Amtrak and Caltrans will use Rail Safety Month as a kickoff to its year-long “Be Track Smart” rail safety campaign, which offers facts and safety tips to reduce injuries and fatalities near railroad crossings and tracks.

“Our goal is to educate Californians to the potential dangers and get them to change how they think and behave around train tracks,” said Caltrans Director Malcolm Dougherty.

Through Caltrans’ support of Operation Lifesaver, free education programs are available for community organizations, schools and businesses to alert Californians to the life-threatening dangers of trespassing on train tracks as well as the fines and penalties for not obeying the laws.