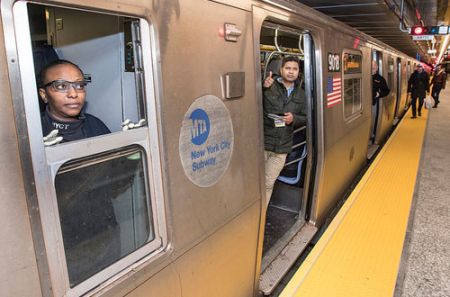 A Metro-North Railroad crew working on the system’s Waterbury Branch on Oct. 9 safely installed 1,161 crossties in a single day, breaking the prior record by two ties that was set in 1984 between Brewster and Dover Plains on the Harlem Line.

“I want to thank the track team for their dedication and record-setting hard work,” said Catherine Rinaldi, president of Metro-North Railroad. “It’s impossible to operate the railroad safely and efficiently without well maintained track, and this work will help keep service running smoothly for our New Haven Line customers.”

“Our track department saw the opportunity to set a record, and they seized it,” said Glen Hayden, Vice President of Engineering for Metro-North.

The crew carried out the crosstie work on a continuous outage of single track to the south of Oronoque Road in Milford, Conn.

“With no adjacent track to inhibit the work, no third rail, and no need to stop work for passing trains, the crew could dedicate complete focus to installing ties,” MTA said.

“This achievement not only speaks to good old-fashioned hard work, but to the genuine sense of pride that Metro-North track crews have in their role maintaining the safety and integrity of the railroad,” said Hayden.

During the Waterbury Branch service outage, which took place Oct. 8 through Oct. 12, crews cut back trees along the tracks, surfaced track and welded joints, as well.

While buses were substituted for trains during the service outage, Metro-North employees at the railroad’s North White Plains shop completed maintenance work on the locomotives that normally run on the branches in order to enhance reliability.

“Metro-North’s work maintaining the railroad’s infrastructure is indicative of how the State of Connecticut is working to improve commuting for our customers,” said James Redeker,  commissioner for the Connecticut State Department of Transportation. “This work will help keep the railroad running efficiently for years to come.”