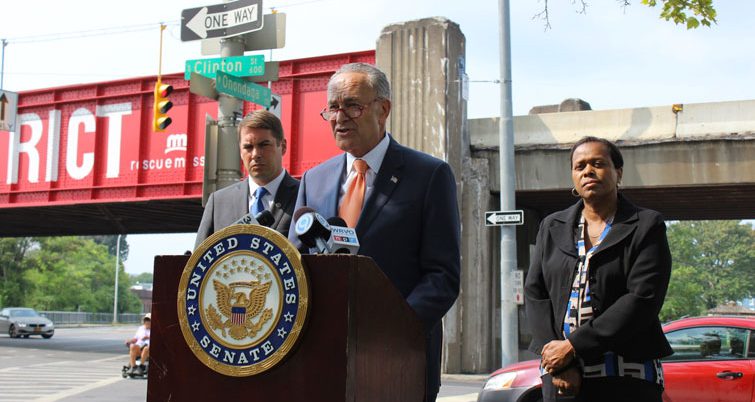 Sen. Chuck Schumer speaks in front of the location where a portion of a rail bridge collapsed on to the railway earlier this summer.
Office of Sen. Charles Schumer

Sen. Charles Schumer (D-NY) renewed his push to increase the number of federal railroad bridge inspections and have the Federal Railroad Administration (FRA) conduct an inspection of the entire elevated rail viaduct in Syracuse, N.Y.

The senator sent a letter to FRA Administrator Ronald Batory reiterating his belief there should be additional federal railroad bridge safety specialists nationwide. Additionally, Sen. Schumer requested the FRA conduct an inspection of the entire elevated rail viaduct in the city of Syracuse, as well as an audit of the most recent inspections conducted by New York Susquehanna & Western (NYS&W) Railroad.

A portion of a NYS&W rail bridge in Syracuse collapsed on July 5 on to South Clinton Street. City officials said extreme temperatures are to blame for the incident.

“[The NYS&W partial collapse] should have served as an eye-opening wake up call for the Federal Railroad Administration that only three people are responsible for auditing 3,000 privately-owned rail bridges that span across New York State – on top of being responsible for all of the rail bridges in over a dozen of other states. It does not take a rail safety expert to know the math simply doesn’t add up. The fact that safety concerns could be slipping through the cracks makes it clear as day that we must increase the number of inspectors and rail specialists that audit these critical links nationwide,” said Sen. Schumer

The senator also called for increasing transparency between the community and NYS&W by urging the inspection reports to be made public.

“Without the complete inspection reports conducted by the private railroad made available to city officials and residents, it is necessary that the FRA conduct its own inspection of the rail bridge. It’s only through increased transparency that we can find out what went wrong in this situation so that we can work together to prevent future accidents,” wrote Sen. Schumer.