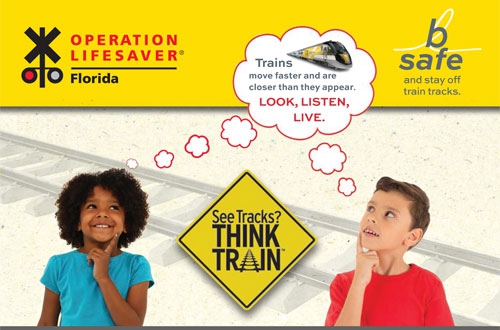 The front of a pledge card Brightline developed with Operation Lifesaver to educate about safe behavior around railroad tracks.
Brightline

A trio of rail advocacy groups, the Rail Passengers Association (RPA), the Association of American Railroads (AAR) and the American Public Transportation Association (APTA), are joining forces to make one thing clear: Railroad tracks are no place for pedestrians, cars and bicyclists.

Citing recent fatal incidents in Florida, what the groups call “an unhelpful political campaign targeting the Brightline rail service” and a local group’s suggestion that using tracks as walking paths is a normal activity, have prompted the joint focus on safety around railroad tracks.

A joint release from the group read, “Unfortunately, some local political action groups have attempted to use these incidents in a campaign to impose new government regulation on railroads. Citizens Against Rail Expansion in Florida (CARE-FL) issued a press release suggesting it is ok and normal for kids to use railroads as a walking path. The fact is, the only safe place to cross rail tracks is at a designated public crossing, which are marked by flashing lights, a gate, crossbucks or a combination of these safety signals.”

RPA, AAR and APTA explain that new regulation would not have changed any of the recent tragic yet avoidable incidents that occurred in Florida. Education does work. Crossing railroad tracks at other points and walking alongside the track is not only unsafe—it’s illegal, and trespassers can be ticketed or fined.

“These tragic accidents are opportunities to teach pedestrians how to avoid dangerous situations and we are committed to helping spread that message,” said Jim Mathews, president and CEO of RPA. “What CARE-FL has done in endorsing railroad rights-of-way as a way to get to and from school is equivalent to telling kids it’s ok to play in traffic.”

Following a recent incident in Florida, chairman of CARE-FL, Brent Hanlon, was quoted in several newspaper articles are saying, “Enough is enough. We need safety measures in place that will protect our pedestrians, our school children who may walk or bike along the tracks to school, our first responders and members of our community.”

The quote normalizes people, specifically children, using railroad property as a path rather than trespassing.

“All of us have a role to play in preventing these tragedies, including discouraging reckless behavior on and around railroad tracks,” said AAR President and CEO Ed Hamberger. “Tracks are not playgrounds or shortcuts. When you see tracks, you need to think train.”

“The American Public Transportation Association joins with these concerned organizations to emphasize that rail trains and tracks are safe,” said APTA President and CEO Paul P. Skoutelas. “We sincerely hope that the recent tragic loss of lives will lead to greater public awareness on how to safely proceed in or around rail tracks. Pedestrian accidents at railroads are preventable if commonsense rules are followed.”

The groups note that public transportation is one of the safest ways to travel in the country, and higher speed rail is a tremendous benefit to Florida, generating thousands of jobs and billions in economic impact. Passenger trains will take millions of cars off the road and connect our state in new ways.

For more information on how to properly educate children and teenagers on how to stay safe around trains, you can find a number of resources at Operation Lifesaver.