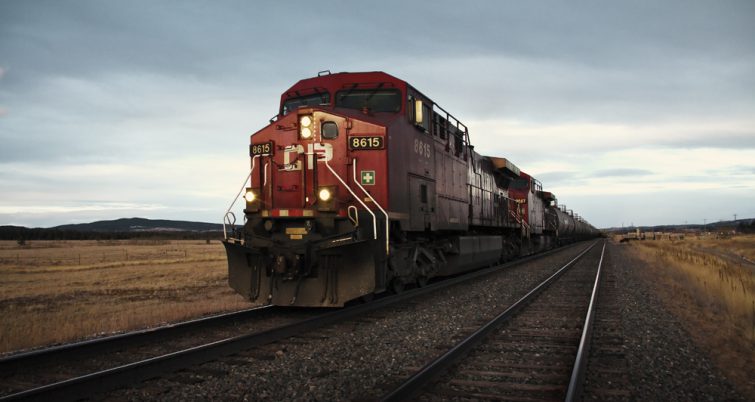 Following up on a story we posted yesterday about families of those killed in the Kicking Horse River CP derailment and crash on Feb. 4, 2019 near Field, B.C., the Teamsters Canada Rail Conference has called for an independent police investigation in to the derailment. Below is their press release on the matter, announced yesterday. Joining the call for a new investigation is the lead investigator from the Transportation Safety Board of Canada, and details of that story follow the TCRC press release.

Following allegations of a cover-up by the Canadian Pacific Police Service (CPPS) in relation to the Field derailment, the Teamsters are calling for an independent RCMP investigation into the deadly rail disaster. The union is also reiterating its call for the federal government to abolish corporate police forces.

IF CP HAS NOTHING TO HIDE, THEY SHOULD WELCOME AN OUTSIDE INVESTIGATION

Yesterday, the CBC’s The Fifth Estate revealed that the Canadian Pacific Railway (CP) conducted its own criminal investigation into the derailment via their fully authorized corporate police force, the CPPS.

The show featured an interview with a former CPPS officer who alleged that the company prevented him from obtaining key witness accounts, withheld evidence and ordered officers to keep the investigation narrowly focused on the crew.

“Three of our brothers died in that derailment. If CP has nothing to hide, they should welcome an outside investigation for the sake of the families and all those affected by this disaster,” said the president of Teamsters Canada, François Laporte.

“Moreover, corporate police forces have no place in the modern world. It is absurd that a company should be able to criminally investigate itself. They’ll never find themselves guilty of anything,” added Laporte. “We once again call on the government of Canada to abolish all forms of private policing.”

The program also uncovered evidence of maintenance problems and a history of derailments on the line where the tragedy occurred. After the derailment, Transport Canada ordered that all railway companies must use handbrakes when trains are stopped on a mountain grade after an emergency use of their air brakes.

“Given the controversy surrounding the criminal investigation into this tragedy, it’s obvious that we must involve the RCMP. Every effort must be made to uncover the root causes and to ensure this never happens again,” said the president of the Teamsters Canada Rail Conference (TCRC), Lyndon Isaak.

Three members of the TCRC died in the February 4, 2019 derailment near Field, BC. The two-kilometre grain train ran away downhill, eventually falling more than 60 metres from a bridge, after its air brake system failed. The names of the victims were Dylan Paradis, Andrew Dockrell and Daniel Waldenberger-Bulmer.

Transportation Safety Board of Canada Comments

CBC News reports that Transportation Safety Board senior investigator Don Crawford said yesterday that “There is enough to suspect there’s negligence here and it needs to investigated by the proper authority.” Crawford said the Royal Canadian Mounted Police (RCMP) needs to initiate an investigation of the situation. A TSB spokesperson, though, said that the Board does not agree with Crawford’s opinion on the matter. The TSB is currently working on an investigation, but their investigation results and report will not be available until 2021.

RT&S will continue to monitor and report on this story as warranted.

To read our initial story on this incident, please visit Canadian National derailment and crash.

Norfolk Southern wants $3.5 million for abandoned rail line, but city of Dayton believes the value is much lower