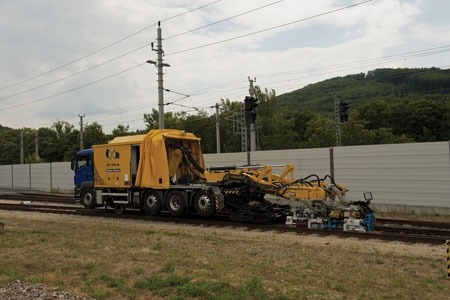 The life of rail steel has greatly improved over the years thanks to a committed research and development effort across the industry. A side effect of stronger steel is that the welds that use to last until the end of the rail’s expected life, aren’t always making it. Welding service providers, as well as researchers at Transportation Technology Center, Inc. (see page 11), are working diligently to increase the reliability of welds and extend service life.

Chemetron Railway Products, a division of Progress Rail Services, says it continues to expand its fleet of mobile welding units with the addition of several new units that can be used for rail installation or portable welding applications. Chemetron is also adding rubber-tired units with cranes that will have a 30-foot reach. The company says these units are ideal for welding turnouts or other long-reach applications and, like Chemetron’s CAT track-hoe units, travel on the road and rail.

On the fixed plant side of its business, Chemetron opened a new welding facility in Russell, Ky. According to Mark McLean, manager sales, this plant has many new features, including automated spot and end polishing, enhanced control and power systems that provide consistently high-quality welds.

“Chemetron works closely with our customers and rail suppliers to extend the life of our welds. At our new Russell, Ky., facility, state-of-the-art control supervises every aspect of the welding process, ensuring repeatability of the operation. The fully-automated material handling includes a new rail end preparation system that polishes the rail head, rail base and the rail butt with no human interaction, resulting in a consistent and repeatable electrical contact while welding,” said McLean. “Chemetron continues to refine the uniformity and reduce the size of the heat affected zone (HAZ). The improved uniformity and reduction in size will extend the life of our welds.”

E.O. Paton (Hong Kong) Ltd. has developed a new welding head designed for crossing welding in close proximity to the adjacent rail. The company says the head also allows welding of third rail systems without removing the conductor rail, while the welding head’s design allows welding of tram rail, as well as conductor rail. E.O. Paton expects to have a production unit available later this year

Dennis Shears, technical director with E.O. Paton, says with the advent of high-allotted rails, the company has been researching technology that allows for a narrow HAZ, as well as hardness restoration (quenched if required). Shears notes that the results so far show that the joint face heat control is critical and that even small deviations of this heat can have a marked effect on the strength of the joint.

“Our process gives a very tight control in this area and allows for long life of the weld (almost identical to the rail life). Since weld face control is critical and subject to variations of alloying, extra care is required in the testing of the rail,” said Shears.

Holland L.P. introduced the next generation of its long reach welder in 2014, which are being used to weld turnouts and insulated joints from the side of track. The company says the welder offers all of the same features and benefits as its standard mobile welders, including hi-rail gear, Holland welding control system and puller lite, but also offers increased mobilization flexibility by utilizing the standard truck body, an increased reach of more than 25 feet and a boom that allows for 300-degree movement.

As for the subject of weld improvements, Russell Gehl, North American sales manager – MOW with Holland says a reduced HAZ and automated alignment are often requested from customers.

“Holland is committed to weld improvement. We are continually researching methods to modify and improve the weld control system and its interaction with the puller lite system. We regularly make welds with these adjustments/improvements and send them to the to the rail manufacturers for evaluation. We use their feedback to even further improve on our weld quality. We are also evaluating the next generation control system, which will allow Holland to further rail weld quality and advancement,” said Gehl.

Lincoln Electric Company, which is headquartered in Cleveland, Ohio, has been moving ahead in 2013-14 with continued improvements to the equipment, consumables and training methods for manganese welders.

Meade does point out that skilled welders cannot be trained on simulators alone and need real arc time to fine tune their welding skills, but says the VR Welding Training can provide a beneficial educational experience.

“Field training remains a key component of our continuous improvement projects,” said Meade. “Anything we can do to make the machines and consumables more user friendly, can only make it easier for the welders. Our engineers work on a daily basis, looking at ways to improve the welding processes so we can give the railroads what they ask us for.”

Orgo-Thermit, Inc., achieves its Head Alloyed Welding process by the use of a patented plug containing alloying elements that distributes micro-alloys in the head of the weld.

The company’s Head Alloyed Welds have gone through successful testing at the Facility for Accelerated Service Testing (FAST) in Pueblo, Colo., and Dave Randolph, president of Orgo-Thermit, says the process is highly recommended for welding high hardness rail steels with running surface hardness above 380 HB.

“Orgo-Thermit continues to research the life of rail welds, thus the testing done at FAST on our Head Alloyed Welds since 2011 when these welds were installed. In 2012, four Head Alloyed Welds reached 255 mgt and were removed from track, only due to excessive rail wear, meaning our welds remained intact,” said Randolph. “In June 2014, these welds reached a life time approximately three times that of a standard hardness weld that were installed and tested in the same section of track at FAST.”

Additionally, Randolph says the company’s Rail Grinding Service Division has been experiencing great success removing corrugations and re-profiling the running surface of rails on numerous rail grinding projects throughout North America. This 12-stone, combined street/rail vehicle can simultaneously grind both rails, comes with on-board fire suppression and dust collection systems and is hi-rail equipped for entry on and off track.

“Researchers have requested harder thermite welds to reduce surface degradation when welding high hardness tensile steel rails,” said Randolph. “Producing a harder weld is not a problem. The problem is to have a weld with ductility in the base of the rail that can still deflect sufficiently. The Head Alloyed Weld developed addresses both those problems.”

Plasser American Corporation points to its many years of experience in the production and operation of rail bound, hi-rail and container flash-butt welding machines and mentions that new welding standards have resulted in an increase in welding requirements.

The company says conventional weld heads used up to now are mostly based on a Russian patent and do not or only partly meet these new requirements. More stringent requirements, combined with Plasser’s knowledge gained over the years, resulted in the development of its own automatic welding robot.

The company says a feature of this new weld head is its working parameters of up to 10 inches stroke with 168 tons of force, which allow closure welds to be made without the use of additional rail pullers.
Welds made by Plasser’s APT 1500 R welding robot utilize a fully automatic process. The welding head automatically aligns the height and running surface, as well as crowns the rail. The automatic centering device measures rail alignment via distance transducers located in the weld head and measurements are saved for quality assurance reasons.

Another special feature the company points to on the weld head is its utilization of alternating current with a medium frequency of 1,000Hz allowing the use of very small transformers in the weld head. The head runs on direct current, which Plasser says has a positive effect on the weld quality.

The built-in welding shear places a load only in the direction of compression utilizing separate hydraulic cylinders. A non-contacting temperature measuring system allows for the precise cooling of high alloy rails with the help of a post heating process. The hydraulic system allows for very fast movements of the weld head, even for closure welds under full load (low consumption weld). The design of the clamping jaws eliminates the need to grind off company markings on the rail web, thus reducing preparation time stated Plasser.

Plasser also says operator errors can be ruled out with the automatic robot welding process, which results in high reliability and documented welds of consistent high quality.

Railtech Boutet continues its focus on commercializing its trio of welding products that include the QP Hybrid Welding System, Head Wash Repair (HWR) welding and the Startwel® Ignition System. According to the company, these three products improve the overall aluminothermic welding process and were designed with customer requests in mind.

According to Oliver Dolder, executive vice president, managing director – Americas, Railtech Boutet’s North American customers are rapidly adopting the product trio and assisting customers with the adoption of these new products has kept the company extremely busy this year.

Dolder says the QP Hybrid mold allows a quality weld to be made because it uses a compressible lining, allowing a perfect fit on the rail and drastically reducing the chance of flashing during the welding process.
The company says its HWR weld is a good preventative maintenance weld and has produced well-received results for the repair of transverse defects, corner gauge defects and minor shelling.

Railtech Boutet’s Startwel Ignition System initiates the pour process for a weld using an electric ignition and is classified as non-hazardous for transport.