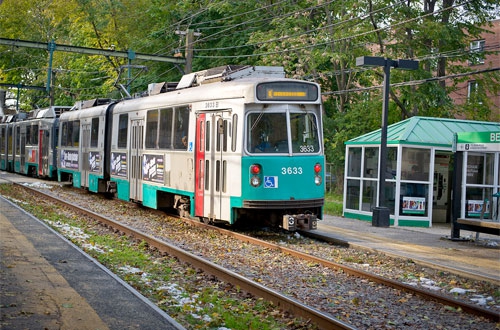 Contractors have begun demolishing the first of three bridges in Somerville, MA., that will be rebuilt for the MBTA’s Green Line Extension project (GLX) connecting Boston to nearby towns.

The work, part of the Massachusetts Bay Transportation Authority’s $2.3-billion Green Line Extension, calls for replacing three vehicular bridges with wider platforms that will house light-rail trains, a footpath and vehicles. When complete, the 4.3-mile extension will provide the communities of Cambridge, Somerville and Medford with a one-seat ride to downtown Boston.

Under the complex plan, three bridges will be removed and replaced during the next year. First up is the Broadway Bridge,  which will be widened by 34 feet and “require a center column pier-style foundation and … new east and west abutment foundations and walls,” according to the MBTA.

The Green Line Extension, which expected to support increased ridership of more than 50,000 passenger trips per day when completed, calls for construction of six new Green Line stations along two branches (the Medford Branch and Union Square Branch) along with the relocation and reconstruction of Lechmere Station.