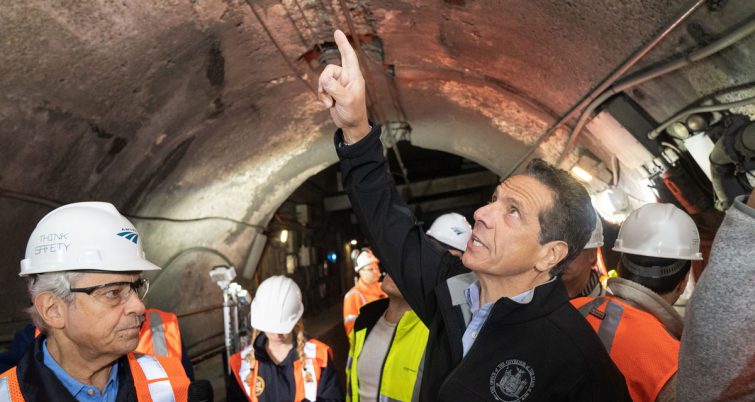 The governor said he toured the tunnel around 11 p.m. because closing it down during overnight hours to accommodate a tour would be the least disruptive to the NJ Transit and Amtrak trains that use them.

“This project is just to maintain functionality,” Cuomo said. “[Repairing] the tunnel doesn’t improve service dramatically. This is just basic functionality of the infrastructure. And it is a major concern and it is a growing concern.”

Cuomo’s plea comes as the $30 billion Gateway Project to build two new North River tunnels to supplement the existing ones and, with an expansion to Penn Station  New York, effectively double capacity,  received just $541 million in federal money in the current fiscal spending bill signed by President Trump earlier this year. That was down from an agreed-on $900 million after Trump tried unsuccessfully to persuade Democrats, led by Senate Minority Leader Chuck Schumer of New York, to support funding for the proposed Mexican border wall in exchange for his backing Gateway.

During Superstorm Sandy in October 2012, both North River tunnels were flooded with seawater, which officials said damaged their concrete lining, corroded electrical cabling and caused standing water damage. The damage caused by Sandy was  made worse by the tunnels’ age and the intensity of their current use, officials said.

The governor said while there has not been a specific plan outlined with the federal government to repair the tunnels, the structures are more 100 years old.* “People think that a tunnel can fill with salt water and then you pump out the salt water and everything’s fine—that’s not actually the case,” Cuomo said. “Much of the residue remains and continues to do damage.”