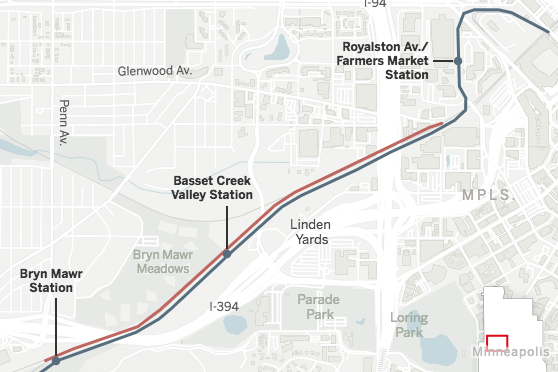 A 1-mile-long barrier wall required by BNSF will cost more than originally expected.

The Metropolitan Council knows who is going to pay for this wall, but the new price is staggering.

A required element in the Southwest light-rail project, which will connect downtown Minneapolis to Eden Prairie, is a corridor protection barrier that will separate freight rail and passenger rail. Back in 2017, the cost to build such a wall was estimated to be around $20 million. Now it is projected to cost almost $93 million, a whopping 356% increase.

The 1-mile-long wall will cover just west of the Royalston Ave./Farmers Market station to the Bryn Mawr station, which is located at the north end of the Southwest line.

BNSF owns the land where the Southwest light-rail line will occupy and wanted the crash wall to be constructed. The wall will prevent collisions between freight and light-rail trains.

In January, the Metropolitan Council approved a $10 million change order to the Southwest budget for excavation and grading. The earthwork activities are the first phase of the wall construction. The council still needs to approve the $82.6 million change order. That cost will be up for a vote at the April 14 meeting.

The Southwest light-rail project is already the most expensive public works project in Minnesota history, and early cost projections were $2 billion. A revised figure has not been provided.

The project also is dealing with delays, as work needs to stop to accommodate the movement of 100 freight trains daily. Other construction issues have pushed back the 2023 start-up date.