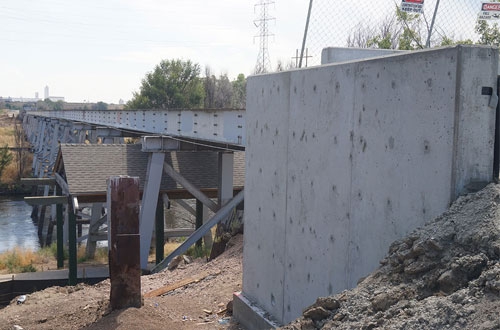 Regional Transportation District (RTD) is reusing materials to replace an old bridge along its North Metro Rail Line rather than building it new.

This refurbishing process is meant to support service to North Metro trains that will travel over the South Platte River from Denver Union Station in Denver, Colo., officials say.

Crews removed the old rail from the bridge during summer 2015, with most of the work completed through this past summer.

RTD workers sandblasted the structures and applied a galvanized primer and fresh paint to the bridge before pouring the footings to support the structure’s walls and installing and back-filled drainage pipes, the public transit service says.

The necessary concrete work followed, which entailed the formation of fine-grade approach slabs and sleeper slabs to preclude the foundation from contracting or expanding.

Crews also installed a cover plate between the approach slab and the sleeper slab and finished flashing the metal recently to weatherproof the bridge, RTD says.

Officials say RTD’s North Metro crews will soon begin installing the duct bank, which will be a pathway for the wire and fiber optic cables to travel between equipment signals and gates.

Another back-fill will be completed before the track panels, ties and hand rails are installed. Officials say trains will travel over the river three times on each trip along the line after the work is complete.