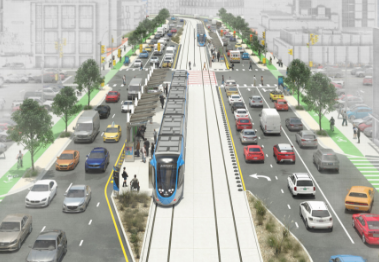 Few people go to the park and wonder what it looks like underneath the surface. That might change in Austin, Texas, as the state House of Representatives passed a landmark bill for the city’s future light-rail line.

House Bill 3893 was passed and allows the construction of light-rail tunnels under Republic Square Park and Brush Square. Capital Metro, which is executing Project Connect, was granted a 99-year lease to the underground rights of the parks. Voters approved the $7.1 billion light-rail and transit system in 2020. The measure now moves on to the Senate, where there is a companion bill.

Republic Square Park is located next to the federal courthouse at Fifth Street and Guadalupe Street and will be the site of a subway station that will connect the Orange and Blue lines. There also will be a downtown circulator connecting with the existing Red Line commuter rail, which goes from downtown to Leander.

Brush Square can be found at Trinity and East Fifth streets and there will most likely be a tunnel or station connecting to the Red Line, the downtown circulator and the Blue Line. The Blue Line will connect riders to the Austin-Bergstrom International Airport.