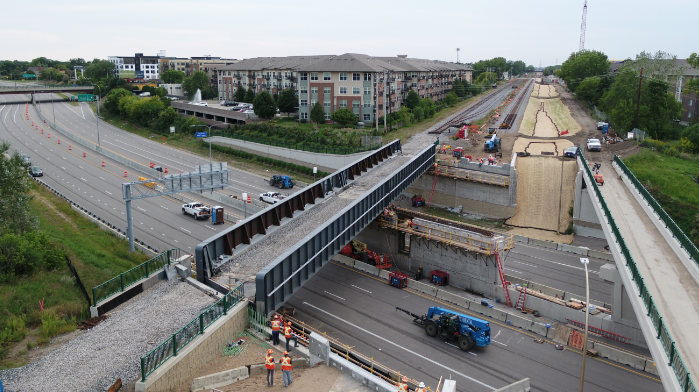 Crews on the Green Line project in Minnesota moved a freight rail bridge.

Metro Transit (Minn.) is getting ready to receive the last batch of federal funding for the Green Line extension project.

The Federal Transit Administration approved over $928 million in federal money for the $2 billion project. Work on the Green Line began in November 2018 and will continue into 2023. The project calls for 16 new stations throughout Eden Prairie, Minnetonka, Hopkins and St. Louis Park. Officials are hoping the extension will help reduce congestion between downtown Minneapolis to the southwestern suburbs.

Over the Labor Day weekend, crews moved a 1.2-million-lb rail freight bridge about 50 ft to a new permanent position over Highway 100 in St. Louis Park.

Construction of the new Prairie Center Drive light-rail bridge in Eden Prairie continues, as rebar and falsework are being installed for deck work. Concrete pouring for the deck is expected to take place in mid-September.

Deck work also is going on at the light-rail bridge at I-494/Flying Cloud Drive in Eden Prairie, and crews are grading for track guideway and are building retaining walls along Flying Cloud Drive.

Several other bridges that are part of the Green Line project are now in various stages of construction.

The bottom leveling slab on the north end of a light-rail tunnel under Highway 62 in Minnetonka is now complete, and construction is now focused on the tunnel walls and base slab. Work to construct the tunnel roof also has started. 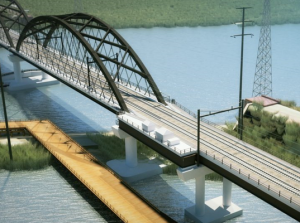 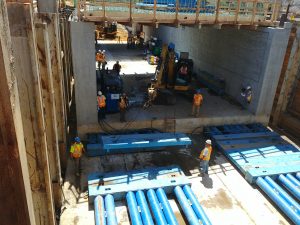