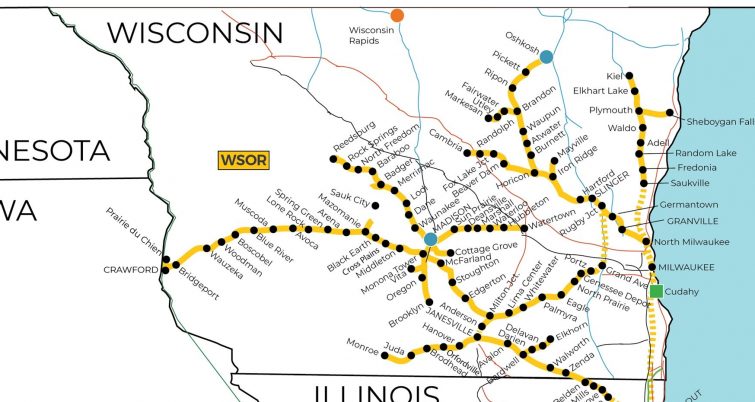 Watco's Wisconsin and Southern line has gained a new customer.

Gov. Tony Evers, together with the Wisconsin Department of Transportation (WisDOT) today announced that a chocolate factory being built in the city of Milton will receive its sugar and oil by rail, thanks to a project supported by a Transportation Economic Assistance (TEA) grant.

The $1 million rail project, 25% of which is funded by the recently approved grant, allows the city of Milton to extend a Wisconsin Southern/WATCO rail line to Clasen Quality Chocolate (CQC).

“TEA grants support great projects across Wisconsin where local officials see ways to advance economic development through infrastructure improvements,” Gov. Evers said. “And deals don’t get much sweeter than finding a way to help deliver sugar to a chocolate factory.”

“Clasen Quality Chocolate is making a major investment in Milton, and we are pleased to support their cooperative efforts with local officials,” Secretary-designee Craig Thompson said. “Helping communities offer good multi-modal infrastructure puts them in good position for economic growth.”

Construction of the new rail spur will occur later this year. CQC plans to spend approximately $105 million to construct and equip their new 350,000-square-foot plant in Milton through multiple phases. The first phase of the project, which adds 50 jobs, is expected to be completed and operational in the fall of 2022. The company, which is based in Madison, also has manufacturing facilities in Middleton and Watertown, Wisconsin as well as Spanish Spring, Nevada.

“We are excited for this partnership between the City, State, and Clasen Quality Chocolate,” said Milton City Administrator Al Hulick.  “This project is the largest project in the history of the City of Milton and could not have been made possible without the substantial investment and commitment that CQC and the State of Wisconsin have made to see it through.”

Since the beginning of 2020, Wisconsin’s TEA program has awarded 13 grants totaling $6.4 million to support transportation improvements linked to business development projects that will create 1,200 new jobs and retain nearly 700 jobs in Wisconsin.

The TEA program provides financial assistance to communities to support transportation infrastructure improvements that will help attract new employers or encourage existing employers to expand.  A municipal or county unit of government must sponsor a TEA application. The project must have the local government’s endorsement, and it must benefit the public.

Why railroad contracting is more like hockey than golf