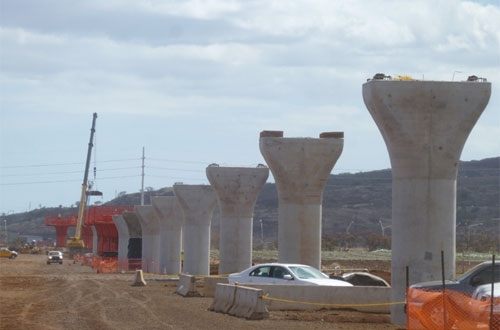 Columns have been placed in West Oahu.

An independent financial review of the rail Honolulu Authority for Rapid Transportation project in Honolulu, Hawaii, confirms the financial capacity to construct and operate the rail system and that the project's financial plan is reasonable and able to withstand and successfully address risks.

According to the report prepared for the Federal Transit Administration by Porter and Associates, Inc., the half-percent General Excise and Use Tax (GET) surcharge revenue forecast that will pay for the local funding share of the project is said to be reasonable. So far, the project has received more than $900 million in GET revenue and another $120 million in federal funding.

In addition, the review performed two “stress tests,” using worst-case scenarios, a 10 percent increase in project costs and a lower rate of GET revenue growth and found that even under those conditions, the city would still have the financial capacity to build and operate the rail system.

“This independent financial assessment analysis of the project was comprehensive and thorough,” said HART Finance Committee Chairman Don Horner. “Their bottom-line conclusion was the overall HART financial plan is reasonable when compared to other projects around the U.S. and our city has the expertise and financial capacity to build and operate the system, which would provide a significant improvement to our existing traffic challenges.”

The report includes a review of the operating costs of the city’s transportation services. It shows rail will account for 18 percent of operating cost. Operating costs for rail is estimated at 43 cents per passenger mile.

“This external review is a key element of the Federal Transit Administration’s evaluation of Oahu’s rail project for our Full Funding Grant Agreement and reinforces the fact that we are on track to receive our FFGA by the end of the year,” said Dan Grabauskas, HART’s executive director and CEO. “This review validates our current financial plan, which includes a total of $1.55 billion in federal funding, $645 million in contingency funds to cover unforeseen expenses and an ending cash surplus of $193 million. It indicates we’re on target.”