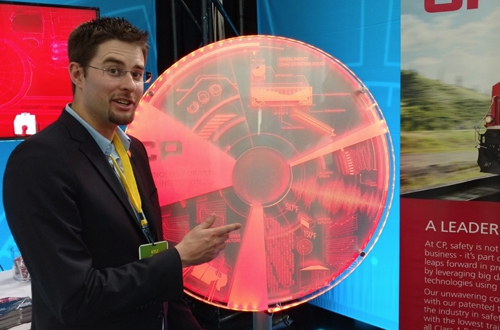 WASHINGTON – Technology class was in session for Congress Monday, courtesy of Class 1 railroads.

The Association of American Railroads organized Rail Tech, an up close-and-personal demonstration designed to showcase the development and investment in innovation that maximizes safety and efficiency throughout the North American network.

Six of the seven Class I’s took part in the event in the historic foyer of the Rayburn Building, which houses offices of the House of Representatives.

Throughout the day, elected officials and their staff viewed exhibits, engaged in hands-on demonstrations and chatted with technology experts from BNSF, Canadian Pacific, CN , CSX, Norfolk Southern and Union Pacific about the role of railroad technology in everything from track, bridge and car inspections to machine vision, predictive analysis, a hazmat app for first responders, and a PTC-enabled locomotive simulator.

The AAR kicked off the day with a virtual reality introduction to freight railroading. Visitors donned VR goggles to get a drone’s-eye inspection of rail infrastructure, and a midair roll-by of a main line train.

Norfolk Southern showed how it uses Big Data and predictive analysis to measure track wear, employing ultrasound equipment to help detect shells and other types of hidden internal damage before they disrupt service.

Collected data has enabled NS to create 150,000 models against which to measure rail conditions, and those statistical baselines help make maintenance more accurate and efficient, at a lower planned cost and without stopping trains, improving customer service.

In fact, the eastern carrier currently is testing main line rail segments installed side-by-side from a half-dozen suppliers in Japan, Europe and the United States. It tests for effects on curves characteristic of so-called “Eastern” rail, which wears differently from the long stretches of tangent track on western lines.

The efficacy of high-tech inspections accounts for its popularity among the largest railroads, where capital costs to replace damaged track on existing lines run as high as $1 million per mile. Similarly, labor expense for a track inspection team runs into the tens of millions of dollars at Union Pacific, the largest Class I.

For railcar inspection, the Omaha-based carrier displayed its machine vision system of thermal imaging and flash LIDAR cameras (LIDAR is a detection system that works on the principle of radar, but uses light from a laser).

The system, currently in place at North Platte, Neb., Loveland, Iowa and Pine Bluff, Ark., uses a dozen cameras and 10 lasers all set at numerous angles to shoot a staggering 40,000 images per second as trains pass in real time. Algorithms parse the images, particularly around the trucks and wheels where most damage and wear occurs.

The system helps eliminate waste by making more accurate inspections of the entire car than humanly possible, while at the same time promoting safety.

Canadian Pacific showed off an acoustic sensor patented by Railway Age2018 Fast Tracker Kyle Mulligan to “listen to the bearings” of trucks. Using data collected by the sensor, Mulligan said CP is able to accurately forecast a 90-day time frame for potential bearing failure, a major breakthrough where a car’s active service has to be balanced with maintenance downtime.

Mulligan, who also is qualified as a locomotive engineer and other crew positions (a requirement he credits to the late Hunter Harrison), observed that while CP’s executive suite has a vision for technology implementation, “there must be a bridge between the Information Technology department and the data subject matter experts. There must be a targeted, hybrid approach.”

The other Canadian Class I, CN , brought a scale model of a steel truss bridge to demonstrate how it uses strain gauges to measure how century-old bridges hold up under the weight of a train on its U.S. lines. The carrier also showed track geometry equipment mounted on hi-rail trucks, as well as technology that conducts automated inspections of joint bars.

Across the foyer, CSX hosted a display of AskRail, a mobile app to aid first-responders at derailments and other situations involving hazmat cars.

Once logged in and verified by a Class I, emergency personnel can search an individual car or an entire train to determine the contents of a car, and access the technical Safety Data Sheets (SDS) issued by manufacturers communicating information on these hazards.

CSX also showed a locomotive cab simulator based on the General Electric AC4400, which it uses to train its locomotive engineers. The digital track routes are accurate depictions of actual lines, enabled with Positive Train Control. Attendees quickly found that the PTC would shut down the locomotive if it detected an overspeed condition. Sadly, the railroad had the horn volume turned way down so as not to disrupt the event.