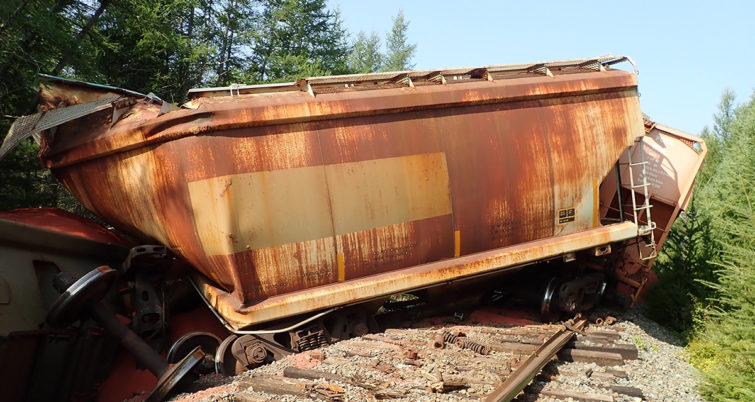 The Transportation Safety Board of Canada on Jan. 5 released its report on the August 2021 Canadian National derailment near Moncton, New Brunswick.
TSB Canada

The Transportation Safety Board of Canada has released its investigation report on the August 2021 freight train derailment near Moncton, New Brunswick.

The derailment damaged 27 of the 30 cars, releasing the majority of their product. There were no hazardous goods or fire involved, and no injuries were reported.

According to the report, the derailment occurred when the track buckled beneath the train as it decelerated on a descending grade near Pangburn Station.

The track buckle was most likely caused by a combination of compressive thermal stress on the rail from the high ambient temperatures and direct sunlight, combined with forces from the braking train and deteriorated rail anchoring.

The rail’s neutral temperature had also decreased over its service life, causing instability at lower ambient temperatures and decreasing the rail’s ability to resist buckling when subjected to compressive stress, TSB found.

CN had been working to reduce compressive thermal stress in the track as well as performing visual inspections to detect built-up longitudinal stress. However, TSB said visual inspections can only detect physical signs of track degradation at a specific location along the rail. They do not allow for the advance detection of hazardous levels of residual compressive stress in undisturbed rail or track structure.

Following the incident, CN issued an operating bulletin instructing train crews to avoid excessive braking and limit the use of dynamic brakes on the Napadogan Subdivision from Mile 17.0 to Mile 21.2.

Additional information on the TSB’s report can be found here.