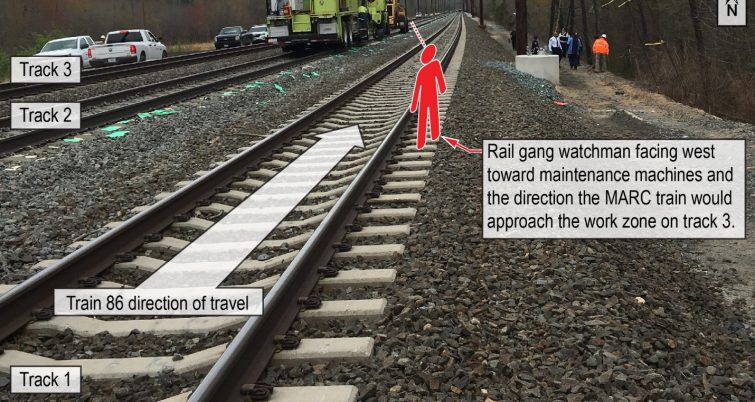 This photo illustration depicts the accident scene on April 24, 2018. The photo shows the three main tracks at the accident site looking north. The point where the roadway worker was struck by the train is marked with the red figure. Photo by Michael Hoepf, NTSB. NTSB graphic overlay by Christy Spangler.​
NTSB

NTSB tells the railroads they must use the new worker protection system in PTC.

The National Transportation Safety Board Thursday again called on the Federal Railroad Administration and Amtrak to put an immediate end to the use of “train approach warning” as the sole method of on-track safety in areas covered by positive train control.

TAW is an older method of using designated watchmen to look out for approaching trains in a work zone. By using TAW instead of available protections provided by advanced positive train control systems, Amtrak circumvented important PTC safety features that could help prevent rail worker deaths.

The safety recommendations issued in Railroad Accident Report 21/02, are based on the April 24, 2018, accident where an Amtrak rail watchman was killed in Bowie Maryland. The NTSB determined that Amtrak’s insufficient site-specific safety work plan for the Bowie project did not adequately consider the challenges of multiple main tracks in a high-noise environment. The watchman was focused on the movement of a southbound MARC commuter train when he was struck from behind by a high-speed northbound Amtrak train.

​PTC could have been used to enforce speed restrictions, which would have automatically reduced the speed of trains in the work zone. Alternatively, PTC could have been used to prevent trains from even entering the work zone. Amtrak’s decision to use TAW in a high-risk area allowed roadway workers to be exposed to the dangers of simultaneous bi-directional train movements at speeds up to 125 mph.

Railway worker fatalities are far too common. The latest Federal Railroad Administration data shows a total of 459 employee on-duty fatalities since 1997. In 2020, the NTSB investigated eight accidents involving railroad and transit worker fatalities. “Improve Rail Worker Safety” is an item on the NTSB’s 2021 – 2022 Most Wanted List of Transportation Safety Improvements.

“More action needs to be taken to protect train crews, maintenance-of-way employees, and mechanical workers from getting killed or injured,” said NTSB board Member Thomas Chapman, who has focused on improving the safety of railway workers. “We have found from our investigations that many of these accidents are, tragically, preventable.”

NTSB Chair Jennifer L. Homendy said Thursday that railroads need not wait for FRA to act. In a letter sent to the leaders of the nation’s Class I Railroads and Amtrak, Homendy said the continued use of TAW circumvents the protections that would be provided by PTC in controlled track territory.

“In short, the decades of funding, research, equipment, and training you have put into the implementation of PTC is being undone by the continued use of TAW,” the Homendy letter said. “The continued use of TAW as a method of on-track safety is a deadly risk that your roadway workers cannot be asked to bear.”

Chair Homendy also sent a letter to the Secretary of Transportation, which can be found here: https://go.usa.gov/xMmFs

The accident docket, which contains interviews, photos, and other factual material is available online at https://go.usa.gov/xMEQ2

Related material is available at https://go.usa.gov/xMm3H​