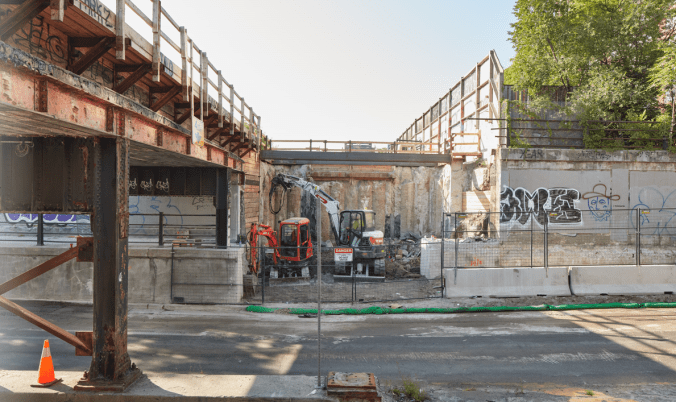 Rebuilding a bridge that spans over one of Toronto’s busiest roads is challenging.

To keep traffic flowing, Metrolinx implemented a partial road closure of Bloor Street West while crews have been reconstructing the Bloor bridge. This work is part of the Davenport Diamond Guideway project – find out how it’s unfolding.

The replacement of the Bloor Street West rail bridge between Lansdowne Avenue and Symington Avenue is a major component of the Davenport Diamond Guideway project. Metrolinx is building new infrastructure to support future two-way all-day train service on the Barrie GO line and the reconstruction of this bridge is an important piece of the puzzle.

Back in November 2020, the west half of this bridge was demolished. If you missed it, you can catch up on all the action here.

To support the future Bloor Street bridge, the existing concrete bridge ends – known as abutments – on which the bridge rests, need to be replaced. That means demolishing the existing abutments, installing structural caissons, and building new cast-in-place concrete abutments.

The abutments are on Bloor Street West – next to the sidewalks and close to the road. In order to demolish and rebuild these safely, Metrolinx needed to isolate the work from people and traffic with a partial road closure. Crews have made progress and successfully demolished the south abutment.

The bridge needs to be completely rebuilt in order to safely support future service expansion on the Barrie line. Part of this expansion means a portion of the mural within Metrolinx’s property line will be impacted when crews begin demolishing the north bridge abutment.

Metrolinx will repair, prime and prepare the damaged area for future artwork restoration.

“The construction will bring communities along the Barrie line much needed service improvements in the future and we recognize the work will have some impact on the mural,” said Luiza Sadowski, Metrolinx senior manager, community engagement.

“We will continue to discuss restoration options with the City of Toronto’s StreetARToronto.”

To keep traffic flowing for drivers, pedestrians, and cyclists during the demolition of the north bridge abutment, a temporary south sidewalk will be installed before the start of demolition and two-way traffic will be maintained on the south side of Bloor Street West. The demolition work will take place approximately Oct. 21 until Nov. 30.

Bloor Street West, between St. Helens Avenue and Ruttan Street, will be partially closed for the demolition work. Here are the details:

While Bloor Street West remains open, Metrolinx advises everyone to plan ahead and build in extra time for travel as there could be delays and congestion, especially during peak hours.

Most of the work will take place during the day, Monday to Friday between 7 a.m. and 6 p.m. The occasional overnight shift or weekend work may be required, and Metrolinx will notify the nearby residents in advance.

For more information on the Davenport Diamond Guideway project and to get the latest updates, sign up for our Toronto West weekly e-blast here or follow us @GOExpansion.

Residents can also connect with the community relations team at [email protected].