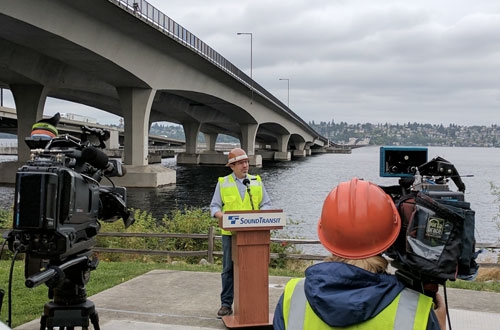 Both the Senate and the House are getting closer to passing transportation bills.
Sound Transit

The Senate is now tasked with merging the $78 billion into a much larger multiyear funding bill. A $313 billion measure was passed by the Senate Environment and Public Works Committee in May. However, the Banking Committee has not approved transit provisions and the Finance Committee still needs to come up with a plan to fund the Highway Trust Fund under a new bill. Meanwhile, the House could be debating its five-year, $547 billion transportation bill during the week of June 28. Both chambers will break for recess at the end of July, but there is a possibility significant progress on a long-term transportation bill could be made by then.

The Senate’s Surface Transportation Investment Act would approve an average of $1.2 billion annually for the Infrastructure for Rebuilding America grant program, and would increase resources for state agencies for planning and research safety improvement programs. The bill also would authorize $1.5 billion annually for the U.S. DOT’s infrastructure grant program, and would earmark $2 billion a year for transportation projects of national significance. Federal freight and passenger rail programs also would receive $36 billion.