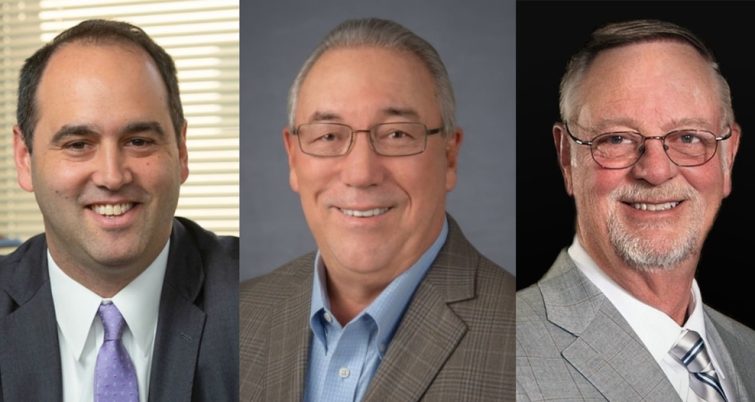 Chuck Baker, Mike Choat and Stan Herzog have recently been inducted into the NRC hall of fame.
NRC

The National Railroad Construction and Maintenance Association (NRC) inducted three railway industry leaders into it Hall of Fame on January 7, 2022, at its annual conference in Phoenix.

Chuck Baker realized he didn’t love investment banking two years into his first job out of Rice University. He decided to take his bonus and ponder his next career move while hiking the Inca Trail in Peru. That’s when he stumbled upon a consequential connection (a friend of a friend who worked at a boutique government relations firm in D.C., called Chambers, Conlon & Hartwell, or CC&H) that pointed him toward a new career in Washington, D.C.

Nearly 20 years later, Chuck has become a dynamic force and trusted authority in advocating on behalf of the railway industry. Through his work leading two pivotal railway associations – first the National Railroad Construction and Maintenance Association (NRC) and now the American Short Line and Regional Railroad Association (ASLRRA) – Chuck has made and leveraged connections that have advanced interests across the railway industry.

Chuck recounts that he did not have any of the necessary qualifications for his first role at the NRC. He had no railroad, no construction, no association, and no Washington experience, but he was eager to dive in and filled a need. So, in March of2004, Chuck began work at the NRC under the direction of Ray Chambers, a principal at CC&H who also served as the NRC president, and Rick Ebersold, a Herzog executive and the NRC Board Chairman.

Over the next15 years, Chuck wore every hat at the NRC, rising from manager to vice president, executive vice president, and then serving as president from 2010 to2019. He learned the ins and outs of association management from the ground up and developed meaningful connections on the Hill, at regulatory agencies, at railroads, and among railroad contractors and suppliers.

Chuck arrived at the NRC at the right time. The industry was growing. Class I railroads were increasing CapEx budgets and outsourcing more work. Short line railroads were expanding and relying on support from contractors. And the federal and local governments were investing more in all types of rail-transit projects. These factors created a positive environment for traditional rail contractors and new players who saw the value in joining together through the NRC to improve their opportunities, capabilities, and performance.

Under Chuck’s leadership and with support from a strong staff and an active Board of Directors, the NRC enhanced its financial standing and expanded its membership, scope of services, and influence. The NRC Annual Conference grew from 350 attendees in 2005 to more than 1,000 in 2019 and became a “can’t-miss” conference for industry connections and actionable information.

The association also grew in stature on Capitol Hill. The NRC fought off repeated attempts to expand Railroad Retirement Board (RRB) and Railway Labor Act (RLA) coverage to contractors. Chuck’s testimony before Congress in 2009 contributed to the passage of the ARRA stimulus, which generated huge investment in passenger rail and the new TIGER grant program. The NRC assisted in repeatedly extending the Short Line 45G tax credit that has allowed short lines to privately invest more than $5billion since its inception, much of it spent on contractors. At the same time, NRC members also became more active advocates for the industry through Railroad Day on the Hill, grassroots programs with members of Congress, and other lobbying efforts.

Chuck credits his career growth to strong rail industry mentors and team members. He specifically cites Ray Chambers with CCH, who taught him about cultivating big-picture opportunities and building personal relationships, as well as Keith Hartwell and Adam Nordstrom for their guidance. Chuck particularly cites the NRC chairmen who believed in him, supported him, pushed him, and grew the NRC: Rick Ebersold, Jon McGrath, Manny Ramirez, Jim Perkins, Terry Benton, Bill Dorris, Chris Daloisio, and Mike Choat. He also notes star staff he says he was “lucky to find and honored to work with,” notably Matt Ginsberg, Ashley Wieland, and Mike McGonagle.

Noble “Mike” Choat covered a lot of miles during his 45-year career in the railroad industry. A consequential leader, Mike drove dramatic change in his service at a large Class I railroad, a signal services contractor, as President and a Director of the Railway Systems Suppliers (RSSI), and as Chairman and a Director of the NRC.

Fresh out of Western Kentucky University, Mike began his career working on a construction crew with the Louisville and Nashville (L&N) Railroad. Over the next six years, he furthered his expertise in both track and signals and in 1982 was named Assistant Signal Supervisor, the first of many supervisory roles throughout his career.

Industry deregulation and consolidation led to bigger roles with larger rail enterprises and eventually to CSX Transportation (CSX) in 1986, where he first served as Supervisor of Signals and then Division Engineer of Signals. Mike earned progressively greater responsibility and in 1992 transferred to the corporate headquarters in Jacksonville, Florida, to serve as Director of Signal Construction. Over the next 10 years, he continued to take on positions of increasing responsibility, including General Manager, Signal Design, and then Assistant Chief Engineer, Signal Maintenance. He found time to earn his Master’s in Business Administration (MBA) in 2001 and soon after, in 2002, he was named Chief Engineer, Communications & Signals.

Mike played a pivotal role at CSX as it enhanced operational and safety performance following deregulation. A key accomplishment came from working with the Federal Railroad Administration (FRA) on a new rule-making process to improve safety in all facets of signal operations. After achieving his 30-year anniversary with CSX, he retired in 2006. The very next day, Mike began work as Executive Vice President of Marketing with Railroad Controls Ltd., a signals services contractor located near Ft. Worth, Texas.

Mike was named President a year later and oversaw the rapid expansion of Railroad Controls. In just two years, the company made strides to modernize its fleet and grew from76 to 600 employees, primarily fueled by new PTC integration business from BNSF Railway. Mike enjoyed the transition from a publicly traded company to a private enterprise along with the freedom to quickly implement management changes to better the company. In 2015, Wabtec Corporation acquired Railroad Controls and Mike was named Vice President & General Manager.

While leading Railroad Controls, Mike served as a Board Director and then President with RSSI and was elected to the NRC’s Board of Directors in 2010. He applied his expertise in working with the FRA to be an advocate for developing impactful safety resources for contractors, which continue to be provided free to NRC members.

Mike credits his wife Kathy for his personal and professional achievements and for keeping him grounded throughout their 39-year marriage. “Kathy put up with extensive travel and 80-hour work weeks for years. I couldn’t have done it without her support. We are grateful for the many friends and associates we’ve gained through the NRC over the years.”

Stan Herzog (1949-2019) dedicated his career to advancing the railroad industry and the Herzog organization he served. He has the distinction of being Herzog’s first employee– hired in 1969 at age 19 by his father and founder of Herzog, William E.(Bill) Herzog. That was the start of Stan’s remarkable 50-year career with Herzog and his life-long engagement with the rail industry.

Stan worked alongside his father to grow Herzog from a regional asphalt company located in Northwest Missouri into a leading rail solutions and services construction and maintenance provider with an operational footprint across North America. Stan assumed the leadership of the Herzog organization in 1993 and served in roles that included President, CEO, and Chairman. Over the 26 years that Stan led Herzog until his passing in2019, company revenue grew dramatically from $107 million to $853 million.

Organic growth and a series of strategic acquisitions initiated by Stan gave Herzog a vertically integrated portfolio of turnkey services that made it the only U.S. company that builds, operates, and maintains rail systems. Herzog’s success and its long-standing industry partnerships are a direct result of a company culture – cultivated by Stan – rooted in honesty, integrity, and hard work.

Herzog’s involvement with PTC began in 2010 when Stan made the strategic move to acquire a rail signal and communications company. He saw a future where PTC technology would play a greater role within the rail industry. Herzog is now one of only a handful of PTC system suppliers and integrators in the United States and continues to help Class 1 and commuter railroads navigate the complicated world of PTC.

Stan was an innovator and was at the heart of Herzog’s research and development (R&D)efforts. He routinely took inspiration from his field experiences on asphalt paving and rail maintenance or construction projects. He collaborated extensively with his colleagues to design and build numerous pieces of specialized MOW equipment that employed technology to make once-manual practices automated and much safer.

Stan saw Herzog’s participation in rail construction and maintenance industry associations as an important way to contribute to and engage with the industry. Stan and Bill were part of the original delegation of railroad MOW and construction businesses that met in St. Louis in 1978 and founded the NRC. Stan saw the NRC’s formation as a valuable way to organize industry businesses to drive and support railroad initiatives, establish safety standards, and recommend best practices. Stan encouraged his fellow Herzog colleagues to be fully engaged in industry organizations – such as AREMA, REMSA, APTA, and ASLRRA – and to be a voice and champion for the industry.

Stan was a generous man who believed fervently in investing in initiatives and institutions that change people’s lives. In Stan’s America, faith, family values, and hard work led to spiritual and societal prosperity. Stan approached philanthropy with humility often making his generosity anonymous. It was not until his passing that many of his philanthropic donations and contributions were made public, including constructing the Frederick Boulevard Baptist Church and the St. Joseph Christian School in St Joseph, MO.