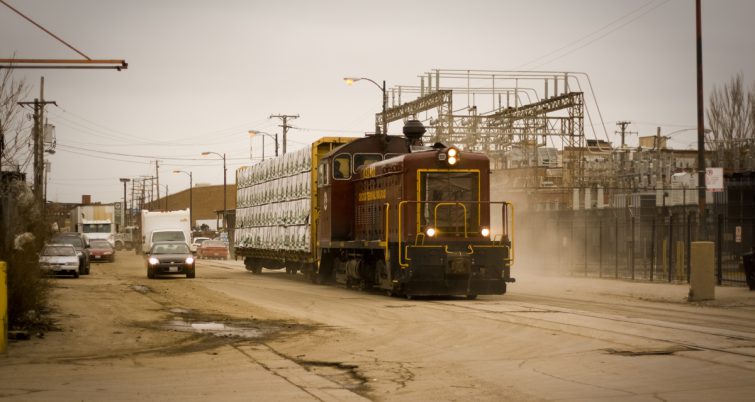 A switcher on Kingsbury Avenue | Photo from Wikipedia

The city of Chicago is approaching its goal of controlling abandoned railroad tracks that span through Goose Island, according to Chicago Tribune reporting.

The city of Chicago aims to take over the former rail line running between the proposed Lincoln Yards development and the south end of Goose Island, which would allow the city to take a step toward establishing a public transit route on the city’s North Side along the Chicago River.

The Chicago City Council is expected to vote Dec. 12 to take over rights to the Chicago Terminal Railroad line. The former freight route could become part of a transit system for buses or trains that the city has its sights on creating from Lincoln Park and Bucktown to commuter trains at Ogilvie Transportation Center (OTC).

The proposed route would enhance public transportation options between downtown and an area on the North Side that is expected to gain residents and employees, the Chicago Tribune reports. The plan could help mitigate traffic and overcrowding on the Chicago Transit Authority’s  (CTA) Red, Blue and Brown Line trains, as well.

“The public transportation expansion could be years away from construction, and there’s no guarantee it ever will happen,” the Chicago Tribune’s Ryan Ori wrote. “Several big unknowns remain, including the project’s design, cost and how it would be funded.”

The proposed expansion could ease the burdens on existing roads, bridges and public transportation infrastructure near a proposed development in the city’s Lincoln Yards area, as well.

The use of light-rail, buses and autonomous vehicles have all been proposed as possible methods of transportation along the route, but the Chicago Tribune reports that light-rail is the least likely method among the options due to its hefty price tag.

Gaining control of the 1.8-mile former freight line is one of Chicago’s multiple plans to form the route on defunct rail and industrial properties along the North Branch of the river.

The Chicago Terminal Railroad line goes through a Lincoln Yards development site along the river, running south on Kingsbury Street before crossing the river on Cherry Street, where it stretches toward the south end of Goose Island.

Early plans for the proposed transit system suggest that the route should continue across the river onto 37 acres of land owned by Tribune Media. A path following separate rail lines located on Tribune Media land would allow the transit line to reach Grand Avenue. The Chicago Department of Transportation (CDOT) and other agencies are considering methods of extending the route south to OTC, the Chicago Tribune reports.

CDOT and the city’s planning department are evaluating possible routes, CDOT spokesman Mike Claffey told the Tribune in the report. CDOT is also reportedly in discussion with the CTA regarding the possibility for the agency to plan and operate the transitway, Claffey said in the Tribune report.

“The city has the opportunity to control the rail line now after negotiations between Sterling Bay, the city and the longtime owner of the rights to the Chicago Terminal Railroad, Iowa Pacific Holdings,” the Tribune report states.

The Surface Transportation Board issued a certificate of interim trail use for the line in April of 2018, allowing the city to become a possible sponsor of a rails-to-trails conversion — a program that creates trails from former rail lines — that could include public transit, according to a city ordinance.

Easement rights for the rail line would transfer from Iowa Pacific to the city of Chicago, depending on the results of the Chicago City Council vote slated for next week, the Tribune report states.