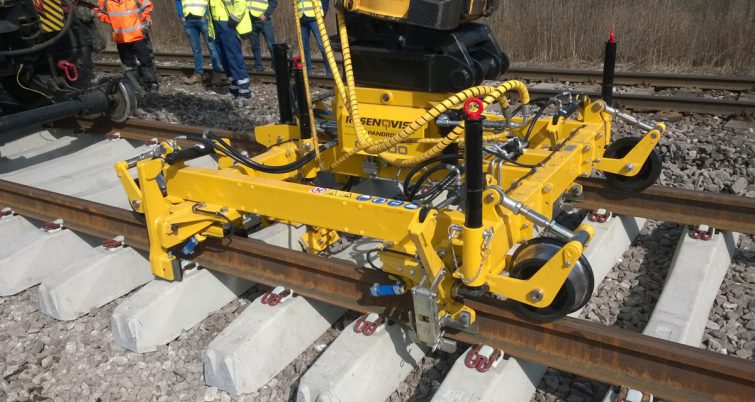 The Pandrol clips are shown while being installed with the CD400 Clip Driver. | Photo courtesy of Pandrol

Pandrol, a company focused on manufacturing rail fastenings, has been awarded a new contract with Eesti Raudtee (Estonia Railways) to supply more than 430,000 FASTCLIP FE fastening systems (four per tie) for the 65km (40.3 miles) stretch from the towns of Tapa to Narva in the north east of Estonia.

As part of the project, the contractor acquired a Pandrol CD400 Clip Driver, which clips and unclips Pandrol FASTCLIP FE fastening systems, as well as providing hydraulic power to raise low ties.

Leonhard Weiss reported that its use of Pandrol’s FASTCLIP FE clip, in combination with the CD400 Clip Driver, saved the contractor 30 percent on installation time in comparison to the time it would take while working with FC ties or using older technology.

“This contract is a great example of how our new FASTCLIP FE can save contractors significantly on installation time,” said Pandrol’s Export Market Manager, Martin Dootsan. “Increasingly, contractors are selecting ‘ride on’ installation equipment for fastenings, such as the CD400 Clip Driver. This is consistent with the move toward reduced manual handling when installing rail fastenings, for health and safety reasons.”

“The whole installation project was so much quicker and more efficient using CD400 with the FASTCLIP FE,” said Aldo Virula, Maintenance Department project manager at Leonhard Weiss RTE AS. “We saved several weeks on site through its use. No other fastening system has the advantages that Pandrol offers and it is a huge benefit to be able to install the fastenings so quickly and safely.”

The Estonian railway network is about 756 miles long, with 492.7 miles of mainline track. It is operated by the state-owned company AS Eesti Raudtee and the private company Edelaraudtee Infrastruktuuri AS, a statement said.