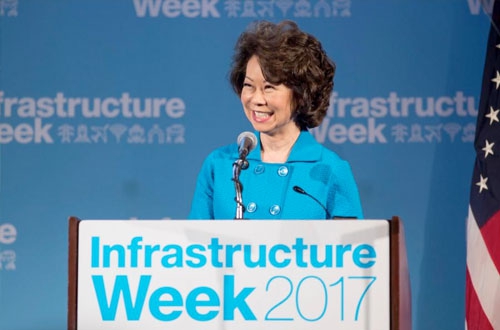 U.S. Secretary of Transportation Elaine Chao said the Trump administration would share its vision for an infrastructure plan soon, specifying within the next several weeks during a speech.

Sec. Chao spoke May 15 at the U.S. Chamber of Commerce kickoff event for Infrastructure Week 2017.

Sec. Chao pointed to Office of Management and Budget’s (OMB) announcement that the infrastructure plan would include $200 billion in direct federal funds that would be used to leverage $1 trillion in infrastructure investment during a 10-year period of time.

“OMB is identifying offsets, in order to avoid saddling future generations with more debt. That’s why a key feature of the infrastructure plan will be unleashing the billions of dollars in private capital available for investment in infrastructure,” said Sec. Chao.

She also mentioned that the administration’s definition of infrastructure expands beyond the traditional roads, rails, bridges, waterways and ports to include energy, water, broadband and veteran hospitals.

Sec. Chao also reiterated the administration’s belief that regulation rather than a lack of funding is the reason behind stalled infrastructure progress. The U.S. Department of Transportation has initiated an internal regulatory review process, which will be tasked with identifying steps to reduce the regulatory burden to speed processes along.

“During the consultation process, investors told us again and again that there is ample capital available, waiting to invest in infrastructure. A major problem is the delays caused by government permitting and approval processes, which hold up projects for years, even decades. These delays increase the risk, adding uncertainty and billions of dollars to project costs. That’s why another key part of this Administration’s infrastructure plan will include common-sense regulatory, administrative, organizational, and policy changes to speed project delivery and reduce uncertainty,” said Sec. Chao.

She explained that any future federal funds would be set up as a supplement to future projects rather than a substitute for local funding commitments.

“As we begin to implement this Administration’s infrastructure reforms, a new paradigm will hopefully be created. This paradigm will shift the focus beyond what is being built, to how projects are being funded and financed,” said Sec. Chao. “For example, states and localities that have secured some funding or financing of their own for infrastructure projects will be given higher priority access to new federal funds. The goal is to use federal funds as an incentive to get projects underway and built more quickly, with greater participation by state, local and private partners.”

She concluded her speech by touching on innovation and how it relates to safety.
“Emerging technology requires a regulatory approach that ensures safety, while encouraging innovation and preserving creativity. This last point is especially important. Creativity and innovation are part of the great genius of America—one of its hallmarks. We must safeguard and nurture this legacy,” Sec. Chao said.