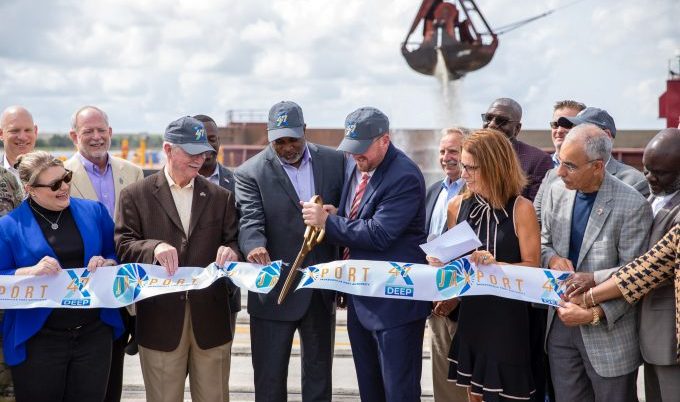 [This week,] federal, state, and local leaders joined JAXPORT and the US Army Corps of Engineers (USACE) Jacksonville District to celebrate the completion of the Jacksonville Harbor Deepening Project through JAXPORT’s Blount Island Marine Terminal.

The project deepened 11 miles of the federal shipping channel—from the sea buoy to Blount Island—to a depth of 47 feet from its previous depth of 40 feet.

The 47-foot harbor provides the channel depth needed for larger ships to call Blount Island to and from destinations worldwide and allows existing ships calling Jacksonville to carry more cargo on board. In addition, the project includes a new turning basin allowing larger vessels to turn around at Blount Island berths.

JAXPORT is served by three railroads – CSX, Norfolk Southern, and the Florida East Coast Railway, with a combined 40 trains per day.

“Florida’s seaports are economic drivers for our state and serve as gateways to domestic and international markets,” said Florida Department of Transportation (FDOT) Secretary Jared W. Perdue, P.E. “Through FDOT’s strategic investments, our seaports continue to expand and modernize to meet the needs of Florida’s growing economy and communities. The JAXPORT Harbor Deepening Project communicates to the world that Florida is open for business and demonstrates Florida’s unwavering commitment to strengthen and grow supply chains while providing a safe, resilient, competitive, and dynamic multimodal transportation system.”

“When JAXPORT began this deepening journey nearly two decades ago, the goal was to build the port of the future,” said JAXPORT Board Chair Wendy Hamilton. “With today’s completion of deepening through Blount Island—the future is here, and JAXPORT is equipped to meet the needs of the nation’s supply chain for generations to come.”

“Anchored by harbor deepening, well over half a billion dollars in infrastructure improvements have been recently completed or are currently underway to improve our container capabilities at Blount Island,” said JAXPORT CEO Eric Green. “With the support of our federal, state, and local partners, JAXPORT is open for business and ready to serve the needs of our customers while creating local jobs here in our community.”

Deepening through Blount Island was completed three years ahead of the original project schedule. The total funding to date is $420 million funded through a public-private partnership between the federal government, State of Florida, City of Jacksonville, JAXPORT, and SSA Atlantic.

“This truly is a great public-private partnership,” Congressman John Rutherford said at the event. “The potential is amazing, but what I really love the most is while we’re here for the deepening ribbon-cutting, the Board and Eric are already talking about how we are going to make port operations even better. This is not the end of anything, this is really the beginning.”

“This project solidifies Northeast Florida as a top destination for worldwide commerce and shipping, with the ability to accommodate larger ships,” said Congresswoman Kat Cammack. “Florida, with her 14 ports around the state, continues to lead the way for maritime transportation and I’m grateful for the hard work and investment in this project, which will only create more opportunities to strengthen our supply chain and make the Sunshine State a top gateway to domestic and international destinations.”

The Jacksonville Harbor Deepening Project creates or protects 15,000 jobs throughout the supply chain, including trucking, warehousing, and distribution. The initial feasibility study for the project began in 2005, and construction started in February 2018.

“As with all Corps projects, this mammoth civil works effort was undertaken to upgrade the nation’s waterways and ports, to strengthen supply chains and promote economic growth while protecting the environment,” said USACE Jacksonville District Commander Col. James Booth. “As a result of this team effort, we expect Jacksonville harbor will grow and prosper as a preferred destination and point of departure for the largest, most cost-effective commercial fleets of the mid-21st century.”

“Jacksonville’s economy and livelihood has always centered around the St. Johns River. JAXPORT has been a crucial driver of economic growth and investments in our city,” said Jacksonville Mayor Lenny Curry. “The completion of this leg of a decades-in-the-making Harbor Deepening Project has required the collaboration and effort of public, private, and nonprofit spheres. It is no small feat and will kickstart the next phase of growth in our job market and investments from regional, national, and global actors.”

In addition to the deepening, berth improvements, and new cranes, more than $70 million in terminal enhancements—funded by SSA and a grant from the US Maritime Administration (MARAD)— are also underway to expand container capacity at the SSA JCT. By spring of 2023, SSA will complete the first three of seven construction phases, producing approximately 31 acres of newly paved and improved operating area. The total project of approximately 93 acres will be complete by the end of 2024, allowing the SSA JCT to accommodate 500,000 TEUs (containers) annually.

“SSA would like to thank JAXPORT, the Army Corps of Engineers, and all our state and local officials for their commitment to this historic event,” said SSA Vice President of Florida Operations Frank McBride. “Forty-seven feet of water positions Jacksonville among the deepest ports on the East Coast, further enhancing the capabilities of the SSA JCT as an international cargo gateway.”

The Jacksonville Harbor Deepening Project is a 13-mile federally authorized project. The current funding model covered the completion of the first 11 miles. The final two miles are authorized and under review.

JAXPORT is Florida’s largest container port and one of the nation’s top vehicle-handling ports. Jacksonville offers two-way ship traffic, no berth or terminal congestion, and same-day access to 98 million consumers. Cargo activity through Jacksonville’s seaport supports 138,000 jobs in Florida and $31 billion in annual economic impact for the region and state. The port continues to make infrastructure improvements in support of JAXPORT’s mission to create jobs and economic opportunity for the citizens of Northeast Florida.