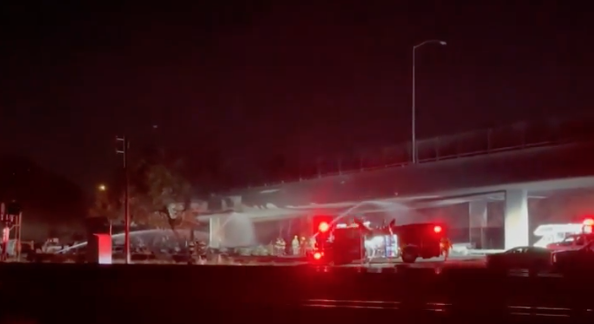 Engineers are worried about the long-term impact of a transit bridge following a fire in Sacramento., Calif.
KCRA 3

Engineers were expected to return to the site of a fire in Sacramento, Calif., to check the structural integrity of a transit bridge.

The fire happened in a homeless encampment underneath the transit span on Roseville Road in the early morning hours of Sept. 8. Flames and smoke could be seen on the eastbound side of I-80, and a number of cars, trucks, and trailers were destroyed.

Light-rail operations were suspended because of concern over the rail and the bridge itself. Engineers thought the tracks could be warped, and firefighters saw pieces of concrete fall from the twin bridges during the fire. The other span carries Tri Stations Road.

Inspectors said they would return to check for any long-term damage to the spans.