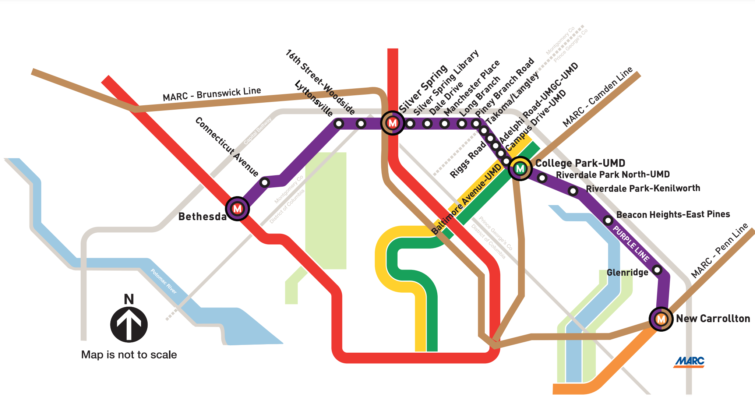 A simplified map showing the Purple Line and its connections to other regional transit systems.
MDOT

A new project study has found that the Maryland Department of Transportation’s Purple Line—currently 4.5 years behind schedule—faces a further seven-month delay that could set back the opening of the light-rail line until mid-2027.

The Purple Line project was expected to be off to a fresh start under a new construction contract that added $1.46 billion in expenditures when the most recent delays, related to moving utility lines, occurred. After the original contractor quit work on the project in 2020 following disagreements over hundreds of millions of dollars in delay-related cost overruns, a new lead contractor started revving up abandoned work sites in August, the Washington Post reported.

Unless project managers establish a method to speed up work, the originally scheduled five-year development period could last nearly a decade. This could double the amount of time roads in a 16-mile area of the Washington suburbs are impacted, as well as how long the work affects the University of Maryland’s College Park campus, according to the Post.

Previously, officials had planned for the rail line between Montgomery and Prince George’s counties to start transporting passengers in late 2026.

According to project records, when the new contractor, led by Spanish firms Dragados and OHL, arrived in April, the state-managed operation to relocate utility lines was already behind schedule. In 2020, the Maryland Transit Administration took over management of the utility work to keep a portion of the project rolling while a new contractor was being sought, the Post reported.

State officials said in a statement that the “contractual deadline” for the line’s launch date has not changed and that they are still evaluating the delays mentioned in investor reports. According to the statement, the state is looking into measures to speed up work and “achieve greater efficiency,” such as revising plans for roadway construction zones, enhancing coordination amongst utilities, and executing more work concurrently.

“Building a complex transportation project through a 16-mile corridor of vibrant and active communities is never going to be an easy task,” David Abrams, MDOT’s Purple Line spokesman, told the Post. “The Purple Line team is committed to developing and implementing solutions to address the challenges inherent on a project of this size, scope and magnitude.”