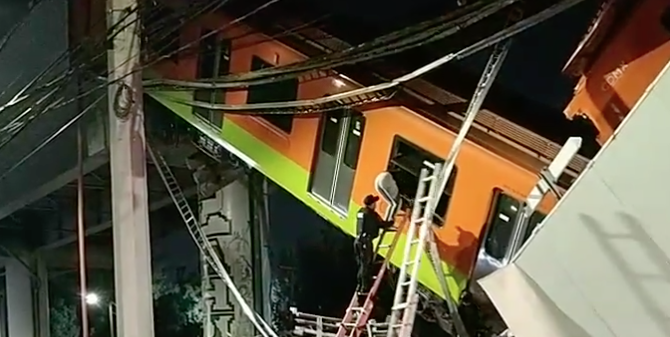 Rescue workers try to pull out survivors of the rail overpass collapse in Mexico City.

As cranes were removing two train cars that were left hanging from a light-rail overpass that collapsed on May 3, Mexico President Andres Manuel Lopez Obrador promised a thorough and open investigation on the cause of the accident.

The elevated train fell 12 ft near the Olivos station, killing 24 and injuring 79. The structure was built in 2012, but ever since the opening it has been pegged as a problem. The design and construction standards were questioned, and there have even been allegations of corruption behind the project.

Sections of the line, including the one that failed, were closed several times for repairs in 2014, and following an earthquake in 2017 there were reports of cracks in the structure. The cracks were repaired. However, Jorge Gavino, who was the director of the city’s metro, said at the time the line would need ongoing maintenance, and that the problems with the structure would never be solved. The metro system has older lines that have survived two major earthquakes in the last 35 years and appear to be holding up. The same cannot be said about troubled Line 12.

Mexico City Mayor Claudia Sheinbaum said a girder had failed on the overpass, but also claimed it was too soon to pin blame on anyone.

A structural survey will be conducted to try and figure out a cause. The secretary general of the union representing metro workers, Fernando Espino, said a construction problem caused the failure.

Watch video of the scene after the collapse.