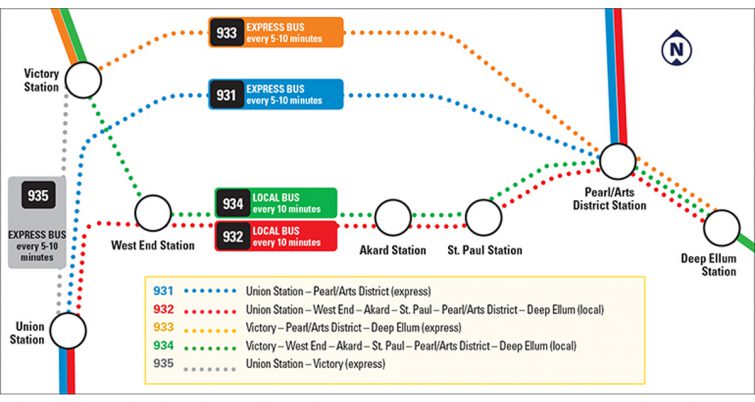 DART buses will be used along the depicted routes in place of trains in Downtown Dallas during planned weekend rail replacement work. | Image courtesy of DART

Dallas Area Rapid Transit (DART) will carry out rail replacement work during weekends beginning March 30 and continuing into September of 2019.

Officials said buses will be used in place of trains in Downtown Dallas during the planned weekend construction periods.

The service closures are planned in order to allow DART crews to replace track along Pacific Avenue and Bryan Street, officials said. Work will be done to repair and add rail crossovers, in addition to repairs to city streets and drainage.

The scheduled work is intended to create a smoother ride through downtown Dallas, eliminate ongoing maintenance issues and enhance the number of areas where trains can switch tracks, reducing service disruptions.

Work will impact the Red and Blue Lines, the Green Line and the Orange Line, officials said in a statement.

Normal weekend service is scheduled to resume in time for the start of the State Fair of Texas.

In December of 2018, RT&S reported that the DART board had awarded multiple contracts to further the construction of its new Cotton Belt light-rail commuter line in Dallas.