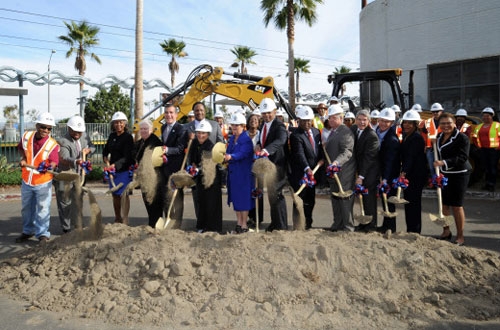 Construction began January 21 on the Crenshaw/LAX Transit Project, an 8.5-mile, $2.058-billion light-rail line that will run between the Los Angeles County Metropolitan Transportation Authority's (LACMTA) Expo and Green lines and is expected to open in 2019.

The groundbreaking bought together top officials from federal, state and local government, including U.S. Transportation Secretary Anthony Foxx and California Sen. Barbara Boxer (D-CA) and was held at the intersection of Crenshaw and Exposition boulevards, where the first of the project’s three underground stations will be built. Demolition of some existing structures will be among the first work done, with heavy construction expected to begin this spring.

“Bringing light rail to this community will spur local economic development and make it easier than ever for residents to access downtown Los Angeles and beyond,” Secretary Foxx said.

The new Crenshaw/LAX Transit Project will be the first rail line to serve Crenshaw Boulevard and the city of Inglewood since the streetcars of the Los Angeles Rail Line stopped running in 1955. In some places, the new light-rail line will use the old alignment for the streetcars.

“The Crenshaw Line is a top priority for me because it will provide a crucial transportation link, create more than 18,000 jobs, help connect communities, reduce air pollution and provide economic development and economic opportunities,” said Sen. Boxer, chairman of the Senate Environment and Public Works Committee.

The new light-rail line will serve the Crenshaw Corridor, Inglewood, Westchester and the area around Los Angeles International Airport with eight stations, a maintenance facility and park-and-ride lots.

In a separate project, planners at both LACMTA and Los Angeles World Airports officials are working together on the Airport Metro Connector that will link the Crenshaw/LAX Line to the LAX terminals via light rail, a people mover or a combination of the two.

The Crenshaw/LAX Transit Project is one of 12 major transit projects funded by Measure R, the half-cent sales tax approved by 68 percent of Los Angeles County voters in 2008. The project is also receiving other state and local funds.

The federal Transportation Infrastructure Finance and Innovation Act program provided a $545.9-million loan toward the Crenshaw/LAX Line. The project also is expected to receive approximately $130 million in other funds from the U.S. Department of Transportation and the Federal Transit Administration.

The line will be built by Walsh/Shea Corridor Constructors, a joint venture between Walsh Construction and J.F. Shea Company (WSCC). WSCC expects to first begin construction of the Crenshaw/Exposition underground station, where the tunnel boring machines will be lowered into the ground and then begin working south to 48th Street, where the tracks will rise to street level.

“The Federal Transit Administration is proud to join with the city of Los Angeles and the neighboring communities to significantly improve transportation options in one of the most congested regions in the nation,” said Federal Transit Administrator Peter Rogoff. “This project is a huge win for thousands of hard-working families and seniors living in Crenshaw who depend on public transportation every day to get to work, school, medical appointments and elsewhere.”