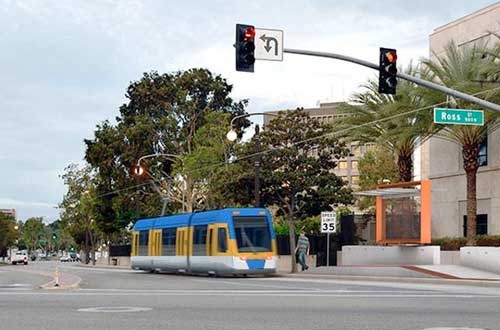 Plans for the first modern streetcar in Orange County, Calif., took several steps forward when the Orange County Transportation Authority's (OCTA) Board of Directors approved a series of actions to help facilitate the design and construction of the project.

• Selecting RNL Interplan as the firm to complete the conceptual design of each of the OC Streetcars station stops. A team of architects and urban designers will work with the community to plan a suitable design for each of the stops along the route.

• Releasing a request for proposals for a firm to manage the construction of the OC Streetcar project. The successful firm, to be selected based on qualifications, staffing and a proposed work plan, will give input on the design to ensure that it can be built and will manage its construction.

The OC Streetcar, now in project development, is intended to provide easy connections for people traveling from trains and buses to employment, retail and recreational areas in the heart of Orange County.

OCTA is the lead agency developing the project, which is expected to cost approximately $289 million overall. OCTA has been working with the Federal Transit Administration through the federal New Starts program. In February, President Obama included $125 million in the federal budget for the OC Streetcar, signaling strong federal support for the project. Other funding is coming from various state and local sources, including Measure M, the county’s half-cent sales tax for transportation improvements.

The OC Streetcar is planned to travel along a 4.1-mile route from the Santa Ana Regional Transportation Center, through Downtown Santa Ana and the Civic Center, along the Pacific-Electric right of way and connect to a new multimodal transit hub at Harbor Boulevard and Westminster Avenue in Garden Grove. Up to six streetcars are planned to run along the route, stopping every 10 minutes during peak hours at 10 stations in each direction.

On the current schedule, construction for the OC Streetcar would begin in late 2017, with service beginning in 2020.