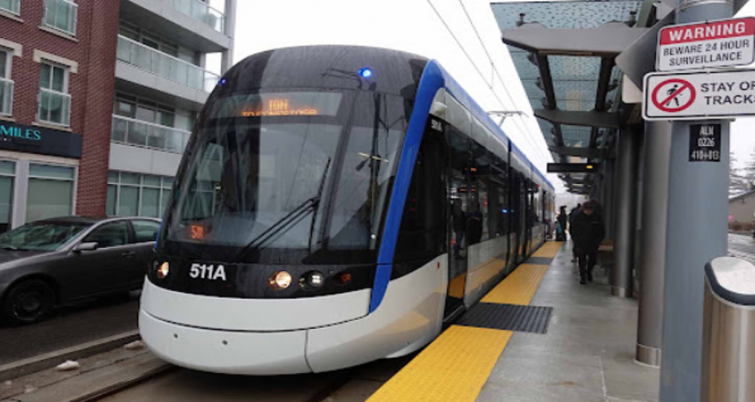 The Yonge North Subway Extension route is being refined.
Metrolinx

The Scarborough Subway Extension is nearing another important milestone as the project’s tunnel boring machine is being prepared to be loaded onto a cargo ship and travel across the Atlantic Ocean. Here’s a look at how the big move is starting out.

Before it begins its work deep below the surface of Toronto, the tunnel boring machine (TBM) for the Scarborough Subway Extension will travel more than 6,300 kilometres from Germany.

As excavation gets deeper at the launch shaft at McCowan and Sheppard, halfway around the world, the project’s massive tunnel boring machine has already started part of its journey to Scarborough.

Since being pictured at factory testing at the Herreknecht facility in Germany in September, the tunnel boring machine has been dismantled and packaged into shipping containers for its voyage.

In the last few weeks, these shipping containers were put onto barges and moved up the Rhine River, from the German towns of Schwanau and Kehl to the Dutch port of Westdorpe.

Preparations are now underway in Westdorpe to load the shipping containers onto a cargo ship called, appropriately for the big job, Jumbo Vision. Jumbo Vision is a Dutch heavy load cargo ship with a carrying capacity of almost 7,000 tonnes – which means it can support the weight of almost 4,000 average cars. Scarborough’s TBM itself weighs around 2,000 tonnes.

Jumbo Vision is scheduled to leave Dutch shores tomorrow (Nov. 26). The approximately two-week voyage will take the TBM across the Atlantic, into the St. Lawrence Seaway, and eventually to Lake Ontario.

Metrolinx will chronicle the TBM’s journey as it makes its way to Scarborough. Transit fans can check back to the TBM naming contest page, follow the project on social media, or sign up for newsletter updates to stay up-to-date on the trek.

Jumbo Vision is scheduled to arrive in the Port of Oshawa in mid-December. After clearing customs, the shipping containers carrying the TBM will then be moved by truck to the launch site at McCowan Road and Sheppard Avenue East, where it will be assembled and lowered into the ground in the spring.

As the TBM gets ready to travel, Metrolinx is getting closer to finding a name for this mighty machine. The submission period for the first phase of the contest closed on Nov.18 with over 200 entries submitted by the community.

The second phase of the contest will launch on Nov. 29 with a shortlist of entries that will be voted on by the community. Visit the contest page to learn more about the contest and how you can participate.

The winning name will be announced in the new year when the tunnel boring machine arrives at the launch shaft site.

As work continues to deliver this project as quickly as possible, Metrolinx is hosting a virtual open house for the project on November 30. This virtual open house will provide the latest construction updates and highlight upcoming work in the new year. Register and submit your questions now at Metrolinx Engage.