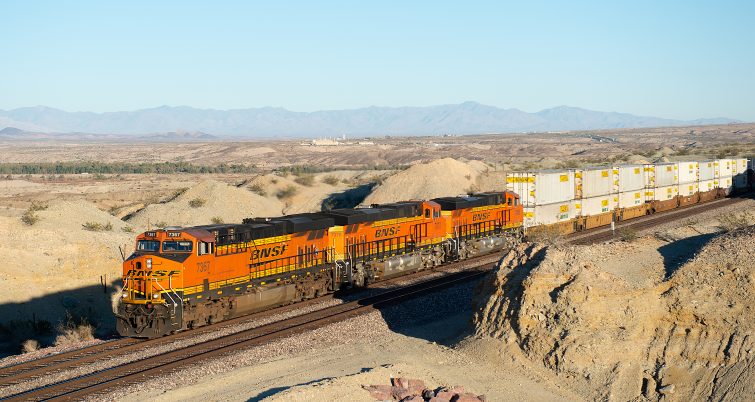 The Association of American Railroads (AAR) reported U.S. rail traffic for the week ended April 4, 2020, and it acknowledged that COVID-19 is increasingly impacting the rail industry.

“The impact of the novel coronavirus on railroads is growing,” said AAR Senior Vice President John T. Gray. “Since 1988, when our data began, total U.S. rail carloads were lower than they were last week only during a few Christmas and New Year’s weeks, when rail operations are seasonally low.”

The numbers seem to corroborate that. For the week ended April 4, total U.S. weekly rail traffic was 429,095 carloads and intermodal units, down 15.9% compared with the same week last year.

“Part of the problem now is sustained weakness in coal carloads, but even excluding coal, carloads last week were down 13.1%,” said Gray. “We haven’t seen sustained declines of that magnitude since the Great Recession. The worst performing commodity category last week was autos and auto parts, with North American carloads down 84% from what they were just three weeks ago. It wasn’t just autos, though: last week, 13 of the 20 U.S. carload categories we track, representing 87% of total carloads, saw year-over-year declines, including big declines in steel scrap, steel products, nonferrous scrap, crushed stone and sand, and petroleum products. Based on rail data, it’s clear that many sectors of U.S. industry are beginning to feel the impact of coronavirus disruptions.

“Intermodal volume last week was down 15.7% over last year. With China in the very early stages of its own recovery, whether intermodal volumes will continue to fall—and if they do continue to fall, how far—will now depend to a large extent on what happens with consumer spending in North America. That, in turn, will depend on how long social distancing steps must remain in place; how well and how quickly federal and state unemployment insurance and other programs fill gaps in household cash flows; and how much the current situation causes consumers to lose long-term confidence and remain in retrench mode not just when health concerns begin to recede but, more importantly, when they have been largely resolved.”

“A sober assessment of the COVID recession’s impact on the railroads drives our estimates down substantially, with 2020 EPS as much as 20-25% below consensus and 2021 closer to ~10% below,” writes Susquehanna Financial Group LLC’s Bascome Majors in the firm’s April 8 Railroad Multi-Company Update. “We believe the COVID fallout to the North American industrial and consumer economies will drive deeply sub-seasonal railroad volumes as customers retrench during 2Q and into 3Q, leading to substantial Y/Y declines in revenue and profits for most rails this year, followed by a sharp, but not full, recovery in 2021. We’ve cut our 2020 revenue and EPS forecasts to Street-low levels for most of the group, but believe it could still take another six months for consensus to bottom, based on our look back at the 2008-9 recession and general sense of sell-side incrementalism.

“We acknowledge a wide range of outcomes, but believe our revised 2020 outlooks are a reasonable approximation of trough earnings based on the information available today, and note our fundamental downside risk assessments are fairly close to individual rails’ lows from late March. Our target prices now capitalize our 2021 EPS at ~18-19x across the group, a ￿not quite peak￿a level we see as reasonable against our sharply reduced estimates and expected look-forward investor enthusiasm for cyclical recovery exiting a difficult 2020. Investors will remember how well the railroads performed in 2010. Net-net, in order of preference, we rate NSC, CSX, and UNP shares Positive on our reduced estimates and revised valuation framework and remain Neutral on CP (modest upside bias), KSU (fairly valued), and CNI (fairly valued).”