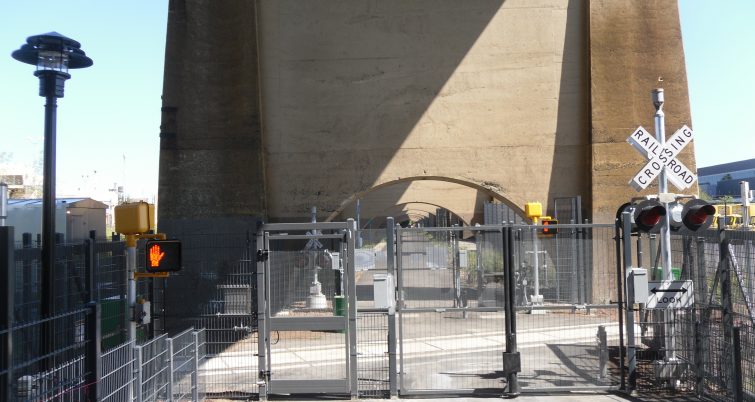 Officials came up with a unique solution for an underserved community.

With 330 acres of public parkland  located between Manhattan, Queens, and the Bronx, Randall’s Island Park is one of New York City’s main recreational hubs, drawing more than 3 million visitors annually. But until recently, the less-than-50-ft Bronx Kill waterway separating Randall’s Island from the Bronx felt like miles, turning what should be a short, serene walk or bike ride into a harrowing navigation through trucks and heavy local street traffic, up a steep set of stairs, and along winding ramps only to cross a narrow waterway so shallow that it runs dry during low tide.

The solution, known as the Randall’s Island Connector, links the south Bronx directly to Randall’s Island via an at-grade quarter-mile bike and pedestrian pathway. The Connector stretches south from East 132nd Street, beneath the approach to the Hell Gate Bridge (part of Amtrak’s Northeast Corridor), across a grade crossing of a single track industrial freight rail siding, over a pedestrian bridge spanning the Bronx Kill directly underneath the Amtrak viaduct, and onto Randall’s Island. 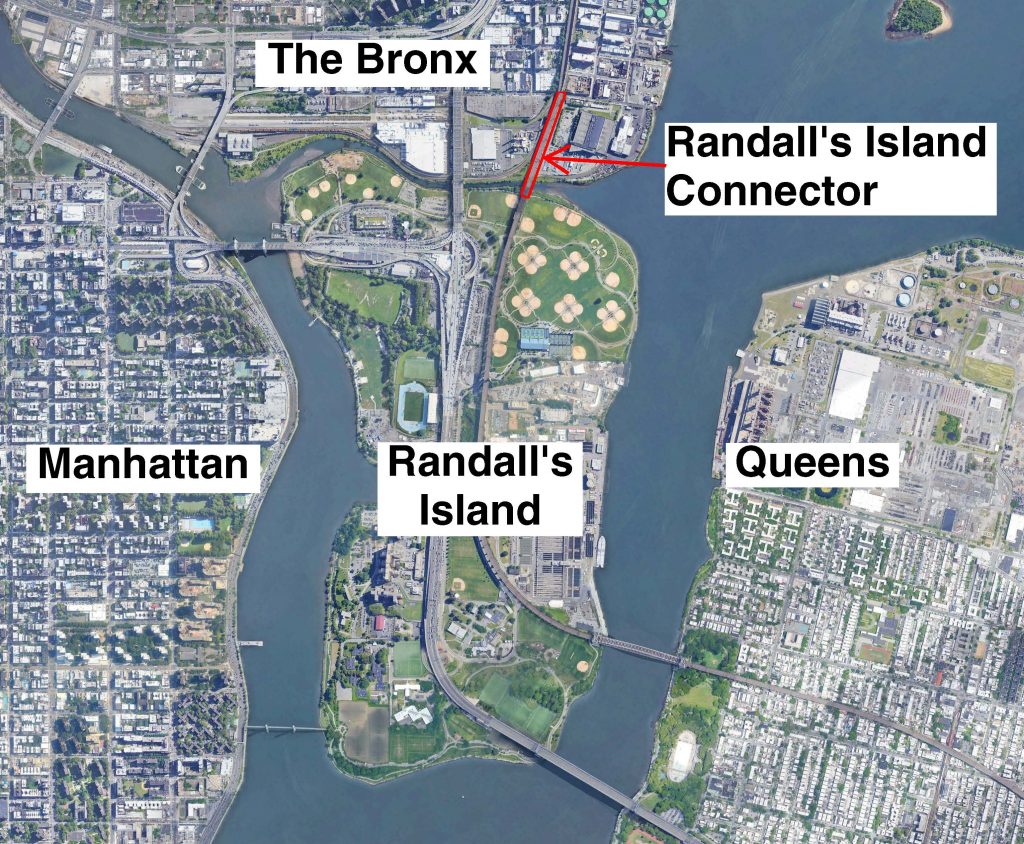 The site’s physical condition obligated an at-grade rail crossing: The limited clearance to the overhead Amtrak viaduct prohibited a pathway bridge over the rail siding; and the immediate proximity to the waterfront, as well as a major electrical transmission duct bank under the same pathway corridor, made going under the rail siding impractical and cost-prohibitive. The Connector pathway and grade-crossing design also had to satisfy a number of property owner and stakeholder requirements to maximize user safety, site security, and protect the freight rail right-of-way:

CSX, the rail corporation operating local freight trains on this siding to serve an industrial rail customer, agreed to accommodate a “stop-and-proceed” order at this location, but required that grade-crossing operation was to be independent of any train crew involvement, as is standard practice;

The adjacent property owners requested climb-resistant perimeter fencing along the pathway corridor and a gate system at the grade crossing that would deter trespass along the rail line and into their respective properties;

NYCDOT required minimum bikeway lane widths through the gates and grade crossing to meet AASHTO standards for shared use pathways;

NYC Department of Parks and Recreation (NYCDPR) required ADA compliance for pathway users, full automation, and the ability to manually shut down the pathway (for maintenance, emergency access, seasonal closures, etc.) without affecting rail service. Most notably, as many urban park visitors have never even seen a functioning grade crossing, NYCDPR rejected a design that utilized the standard grade-crossing gate arms scheme and required a full-height closure with no ability to circumvent the grade-crossing gates.

In response to the design criteria, HDR designed a rail crossing featuring two sets of locking gates, electronically controlled by an oncoming train. The gate system includes two 20-ft-wide cantilevered sliding gates to extend across the tracks when a train is not present (to deter path users from trespassing onto adjacent properties), and two pairs of 5.5-ft-wide x 8-ft-high swing gates locked across the path during train crossings (to deter path users from crossing the tracks while a train is present). The gate cycle takes roughly 90 seconds to fully execute, with the pathway gates locking before the rail gates open. The order reverses after the train has passed. Since the crossing is not monitored, the design included several safeguards in the project such as designing the gates to be compliant with UL-325 (automated gate operator safety guidelines). This includes contact sensors on the gate edges, force sensors on the gate operators, auditory alarms while gates are in motion, and other protocols. Furthermore, the designers provided 4-ft-wide manual emergency egress gates on either side of the track in the event that anyone inadvertently remained within the crossing area when the path gates close, multiple logical safeguards in the gate-closure software, and an automated error notification sent via text message to the local NYCDPR administrator who has an on-call service agreement with a certified grade crossing maintenance contractor.

The single-track rail siding is Class 1 track with an average of three trains per week, operating at approximately 5 mph. It is an industrial siding with no automated signals. In order to activate the grade-crossing gate sequence, the designers added insulated joints on the track at 100 ft from either side of the grade crossing and a signal circuit to this section of track. A lunar signal also was added on both approaches to the track gate to provide an additional visual cue to the rail crews.

In addition to these operation intervals, the designers identified the six potential failures that may occur during operation
as follows:

Any of these six conditions would trigger an alert to be sent via cell modem to the park administrator for further action. An uninterruptible power supply was sized and installed on-site to accommodate electrical loads for all equipment, including three traverses of the grade crossing within 72 hours, a time interval within which it is reasonably expected that utility power would be restored in New York City.

Since the rail siding is not perpendicular to the Connector pathway, the pathway alignment was locally offset at the grade crossing to channel bicyclists into approaching the track as close as possible to 90° in order to maximize grade-crossing safety. Standard pedestrian traffic signals with countdown timers were added to each direction of path approach to the grade crossing.

There were several other constraints that needed to be addressed for the design and construction of the Connector pathway and grade crossing:

Track removal and installation of the grade-crossing track pad was limited to seven days and included provision to have rail deliveries temporarily switched to truck during any additional outages;

Overhead clearance was limited by the lowest of the Hell Gate viaduct’s arches (10 ft +/-), requiring cast-in-place concrete to be carted in for smaller pours, and pumped in from the adjacent properties (with permission from owners) for the larger pedestrian bridge deck pour;

Subsurface clearance was limited by a large, shallow electrical transmission duct bank, requiring specialized gate and fence foundations to bridge over ducts that were encountered;

Given the site’s immediate proximity to Long Island Sound, the gate operators and all grade-crossing equipment were raised above the 100-year flood elevation;

The Connector pathway utilizes green infrastructure and a sustainable stormwater management plan that avoids any direct discharge of stormwater. The design includes 11 rain gardens to retain, cleanse and filter 100 percent of the stormwater on-site, relieving the city storm sewer of additional runoff and avoiding a new outfall. Native and drought-tolerant plants were selected to withstand the shading and highly variable moisture conditions created by the partial cover of the overhead viaduct. 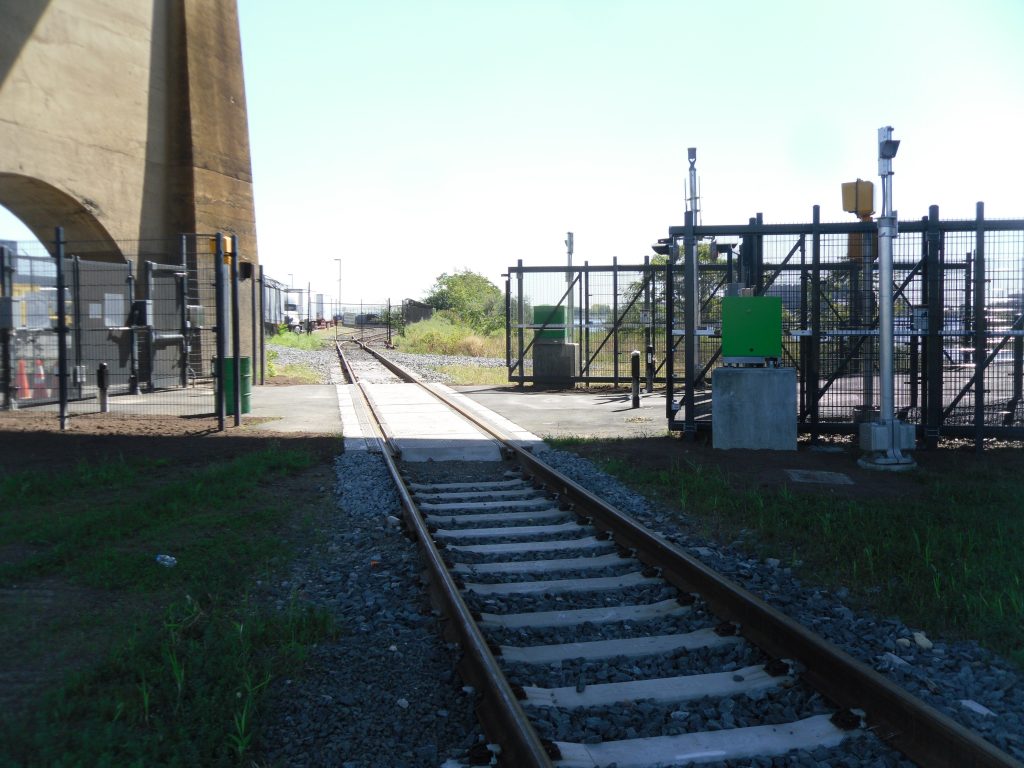 The Randall’s Island Connector is the culmination of more than two decades of community interest and activism to create a new, at grade, fully ADA-accessible connection to Randall’s Island Park, a major New York City recreational hub. It also serves as one successful example of how urban municipalities and the rail industry can work together to safely increase public access across rail rights of way, providing opportunities for development of similarly constrained sites.

This story appears in our March print issue and is authored by Anthony M. Falcone, P.E.