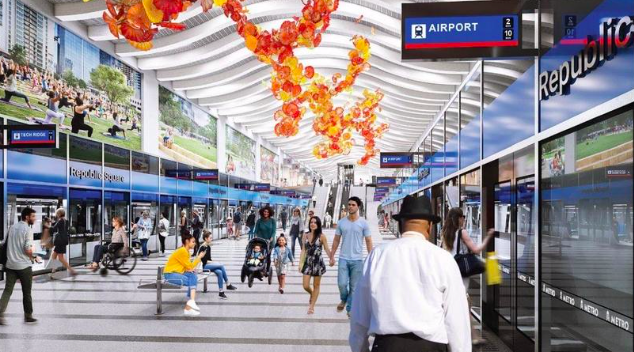 Austin homeowners would likely pay an additional $300 in taxes for a new transit line running through the heart of the city.
Capital Metro

Called a once-in-a-generation investment, the proposed new rail line for the city of Austin, Texas, will most likely have one crack to sway voters in 2020. State law calls for taxing bodies to place tax increases more than 3.5 percent on the ballot. Capital Metro shared details of its proposed $9.6 billion Orange Line and reconfigured Blue Line to the Austin City Council on March 9, and the transit agency could be asking for a whopping 22.5 percent increase in the city’s tax rate.

The November ballot could be the place to put that tax increase to a vote with the public. The last time Austin went to the voters for transit funding was in 2014, and a $600 million measure was soundly defeated. This time, those in favor of the Orange and Blue line projects are trying to convince voters that now is the time to do it, and the way to take it is to just yank it off all at once. If approved, Austin homeowners will be paying an additional $300 a year.

Austin also has used bonds to fund large infrastructure projects in the past, which also requires voter approval. However, because Capital Metro also will have to rely on the Federal Transit Administration paying $3.8 billion for the project it needs to supply a dedicated maintenance funding source. Texas law also prohibits funding maintenance via a bond.

It could take as long as nine years to complete the Orange and Blue line projects. Cap Metro will take its transit plan to the public in the coming weeks.