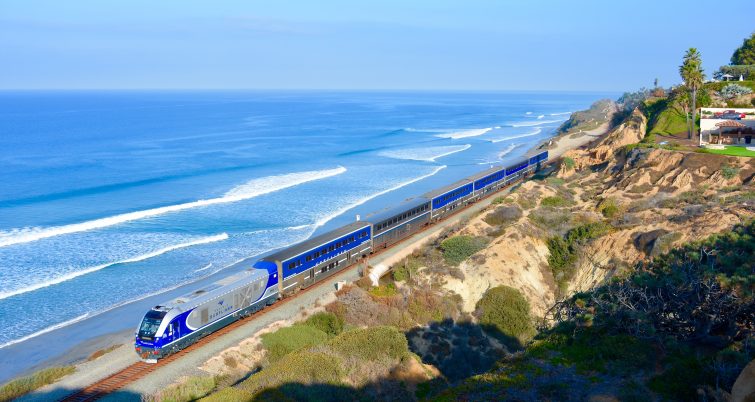 Amtrak met regulatory obligations in response to bluff failures along its Pacific Surfliner route, but it could improve its awareness of potential operational risks by participating in ongoing discussions with regional stakeholders, an Amtrak Office of Inspector General report released Wednesday found.

Amtrak operates its Pacific Surfliner in California on a 351-mile route between San Luis Obispo and San Diego. The track along the route is not owned by Amtrak, but by various host railroads such as the North County Transit Authority and the Orange County Transit Authority. These host railroads are responsible for inspecting and maintaining the tracks and establishing safe operating conditions, the report said.

Since 2018, at least six bluff failures have occurred in the Del Mar Bluffs area, just north of San Diego, causing temporary closures and speed restrictions on Amtrak’s high-volume route which runs along the bluffs in some places. The most recent failure occurred in February 2021 when a 60-foot seawall collapsed at the base of a nearly two-mile stretch of track that runs along the bluffs.

The OIG found that the company complied with regulatory obligations in response to the conditions in Del Mar by complying with speed restrictions and track outages enforced by the host railroad. These steps, according to company officials and other regional stakeholders, ensured safe operating conditions at all times.

The OIG found, however, that Amtrak could improve its awareness of local issues in the Del Mar area by participating in regional working groups. For example, after a major bluff slide in late 2019, the California State Transportation Agency organized a year-long effort to examine short- and long-term bluff stabilization issues that included more than 70 participants. Amtrak—the largest passenger operator on the bluffs—did not participate. The report noted that Amtrak’s participation in such groups would likely put the company in a better position to identify and manage risks on host railroad tracks.

In addition to service disruptions due to bluff failures in Del Mar, Amtrak partially shut down Surfliner service for three weeks in September 2021 after coastal erosion and high tides caused the railroad tracks to shift 14 inches in San Clemente, California. Amtrak took a more proactive approach to the incident by initiating a formal risk assessment and seeking assurances regarding the track’s safety and the host railroad’s efforts to mitigate risks.

As part of its assessment, Amtrak sent its Engineering department subject matter expert in slope stability and drainage to the San Clemente site to meet with the host railroad and its contractors to understand the risks and planned actions needed to restore operations. These actions, according to Amtrak officials, established an effective working relationship with the host railroad, allowing for Amtrak’s Engineering department to share expertise gained from addressing similar conditions on its Empire route along the Hudson River in New York.

The report said that Amtrak should consider designating company personnel to participate in ongoing discussions with stakeholders about evolving coastal conditions, short- and long-term remediation efforts, and potential realignment of the Pacific Surfliner route. More information is included in the full report which can be downloaded on the OIG’s website: https://direc.to/hZHC.