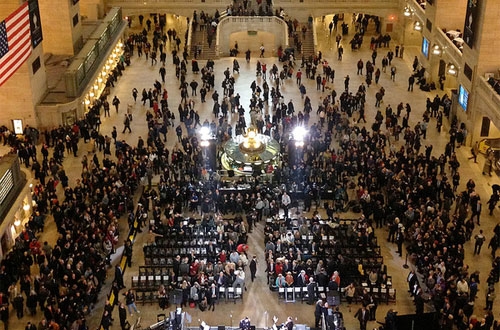 The public will enjoy a full day of activities, including a morning public rededication ceremony and musical performances well into the evening. The morning ceremony featured elected officials, high-profile celebrities and performances by award-winning musicians and New York student performers.

Feb. 1 is also the opening of “Grand by Design,” a six-week exhibit that chronicles the history and impact of Grand Central.

These events fall 100 years to the day that the first set of keys was handed to the terminal’s station master on Feb.1, 1913. (The first train left the terminal just after midnight on Feb. 2. To commemorate both the past, present and future of Grand Central, events on Feb. 1 and throughout the year are guided by four themes: Happy Birthday to Grand Central, marking its historic first century; Preserving a Landmark; Creating a Legacy, focused on renovation of the terminal’s 42nd Street entrance and other physical improvements; Grand Centennial Parade of Trains, anchored by a rare public display of historic train cars with public activities centered on the history of railroading and Grand Central: The Next 100 Years, featuring a variety of exhibits and public events throughout 2013 that will explore how this monument to American transportation continues to inspire innovations and improvements in travel.

“As a native New Yorker, I lived through the dark and dingy days of Grand Central Terminal, when people dared not linger,” says Acting MTA Chairman Fernando Ferrer. “I lived through the scourge of subway graffiti and a broken transportation network. The restoration of this great public space is symbolic of the renaissance of New York City and its transportation system. Hats off to Grand Central Terminal and the visionaries who made it possible.”