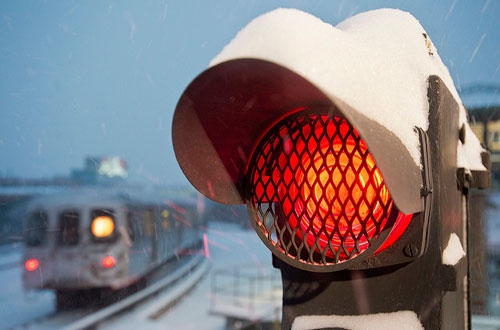 A signal light at the Stillwell Avenue platform in Brooklyn during the 2014 snow storm that hit the New York City area.
MTA | Patrick Cashin

The New York City subway boosted speeds on two lines over the weekend and will increase speeds of other trains in the coming months, according to a story in The New York Times.

Sections of the N and R lines in Brooklyn saw train speeds rise from 15 miles an hour to as much as 30 miles an hour, the Times reported. The speed increases come as workers across the NYC subway system have begun replacing faulty signals that triggered train brakes at low speeds.

Slow moving trains are a constant headache for New York commuters. Rules imposed following a rear-end collision on the Williamsburg Bridge in 1995 led to new speed limits on the system. But Andy Byford, who became president of the New York Transit Authority in January told the Times those rules are stricter than needed.  Today he is scheduled to outline his plan to boost speeds on multiple parts of the system to the Metropolitan Transportation Authority’s board, which oversees the system, the Times reported.

A special “speed unit” rode every mile of the system over the summer and found numerous problems that, if fixed, would allow for faster trains. Among the more troubling items found by the three-person “speed unit” team were 267 faulty signals that forced operators to pass trains more slowly than needed.

A spokesperson for Transport Workers Union Local 100, which represents thousands of NYC subway workers, told the Times he was comfortable with the increased speeds ordered by Byford.

As Byford works to increase train speeds he’ll have help from an old friend. Pete Tomlin, who worked with Byford on both the London Underground and Toronto Transit Commission, will take over as head of the agency’s systemwide resignaling efforts in January 2019.