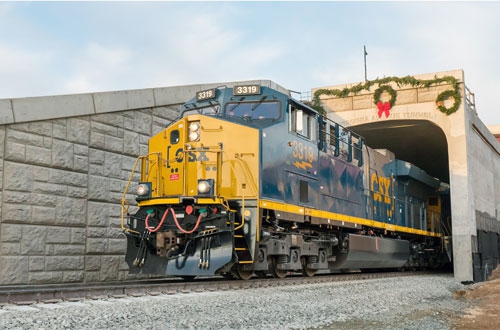 The first train carrying double-stacked containers travels through the south tunnel of the Virginia Ave. tunnel on Dec. 23, 2016.
CSX

The Virginia Avenue Tunnel in Washington, D.C., hosted its first train on Dec. 23., marking the on-time completion of the first phase of the project.

The two-phase tunnel project is the final of 61 clearance projects included in the $850-million National Gateway Initiative, which will clear the way for double-stacked intermodal freight to be transported between Mid-Atlantic seaports and the Midwest on CSX’s network.

The first CSX freight train passed through the new southern tunnel carrying double-stacked intermodal freight containers between Portsmouth, Va., and North Baltimore, Ohio. Work on the northern tunnel has already begun and CSX expects the entire project to be completed on schedule in mid-2018. The project is replacing an existing tunnel, portions of which were first constructed in 1870, that does not provide sufficient vertical clearance for double-stack intermodal containers and is not wide enough to allow a two-track rail configuration.

“Clearing the National Gateway for double-stack freight creates more efficient, more environmentally friendly routes to move the essential goods that fuel today’s economy,” said Michael J. Ward, CSX chairman and chief executive officer. “Thanks to the support of our federal and state partners over the past eight years and the commitment of CSX’s shareholders to invest in the company’s future, the double-stack-cleared National Gateway will allow CSX to better meet the needs of consumers and businesses throughout the eastern U.S. for decades to come.”

CSX says that when both tunnels are complete, the Virginia Avenue Tunnel project will relieve a significant Mid-Atlantic rail bottleneck that impacts freight and passenger service in the region as the growing volume of rail traffic has consumed the capacity of the existing infrastructure.

On December 15, Maryland submitted an application for a U.S. Department of Transportation FASTLANE grant to double-stack clear the Howard Street Tunnel and ten highway/rail crossings in Baltimore, which would remove the final impediments to a fully double-stack cleared rail corridor between Florida and New York. The Howard Street Tunnel project, if funded, will generate competitive advantages for the Port of Baltimore, remove additional trucks from the nation’s highways and create more than $640 million in benefits to 25 eastern states. CSX has committed to contribute $145 million of the funding required to complete the project.