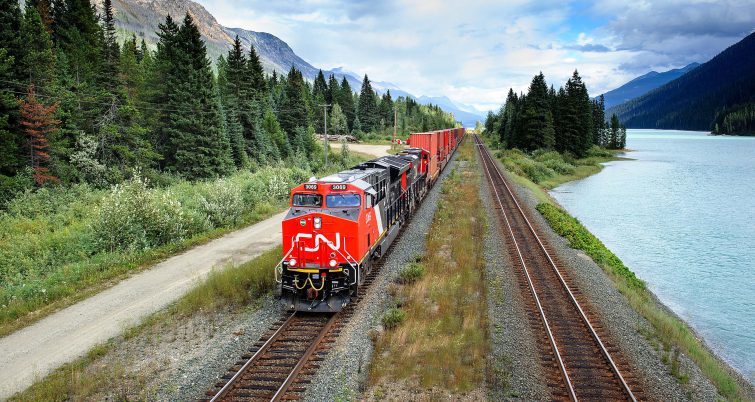 Given a lack of progress at the bargaining table, the Teamsters Canada Rail Conference (TCRC) last night served notice of intent to strike to Canadian National Railway (CN). The union hopes to reach a negotiated settlement that its members can ratify, and to move forward without a service disruption.

In the event that parties are unable to reach a negotiated settlement, over 3,000 conductors, trainpersons and yard workers will exercise their legal right to strike on Tuesday, November 19 at 0:01 a.m. ET.

CN currently requires TCRC members to operate trains alone from outside of the locomotive, hanging on to moving trains with one hand while operating a remotely controlled locomotive with the other. Railroaders are expected to do this in rain and in freezing temperatures, sometimes for distances of up to about 17 miles.

The union’s demands to cease these dangerous practices have fallen on deaf ears and the company has refused to come to a satisfactory agreement at the negotiations table to adjust their operating practices in the interest of safety.

The company also wants to make it more difficult to take time off and make employees work longer hours, in an attempt to get more work done with fewer people and to reduce staffing levels.

“Fatigue has been recognized by the Transportation Safety Board as a major safety problem in this industry. Too many railroaders are operating trains when they should be resting,” explained the president of the TCRC, Lyndon Isaak. “For the safety of all Canadians, we cannot allow CN to make it even harder for our members to get the rest they need.”

Moreover, CN is demanding that the union accept a lifetime cap on prescription drug coverage which would be tantamount to denying workers – and their families – proper treatment for some forms of cancer, rheumatoid arthritis, diabetes, and other diseases.

Wages are not a major sticking point in these negotiations.

Arbitration does not work for workers.

Rather than reaching an agreement at the bargaining table, CN is intent on submitting these issues and more to binding arbitration. By resolving its differences with the union through arbitration, the company hopes to achieve gains that could not have otherwise been made by negotiating in good faith.

“CN is telling our members that they are facing tough times, but the reality is that they made over $3.8 billion in the third quarter of 2019. They should be ashamed to be pleading poverty,” added Lyndon Isaak. “This obsession with profits and shareholder return, at the expense of just about everything else, is exactly what is wrong with our economy.”

The union and the company have been in negotiations for seven months and have been working with federal mediators for the past five. In September, workers voted 99.2% in favour of strike action. The previous collective agreement expired on July 23, 2019.

A work stoppage would bring CN’s operations to a halt but would not affect public transportation.

Talks with the company are ongoing in Montréal.

Teamsters represent 125,000 workers across Canada, including over 16,000 workers in the rail industry. The International Brotherhood of Teamsters, with which Teamsters Canada is affiliated, has 1.4 million members in North America.